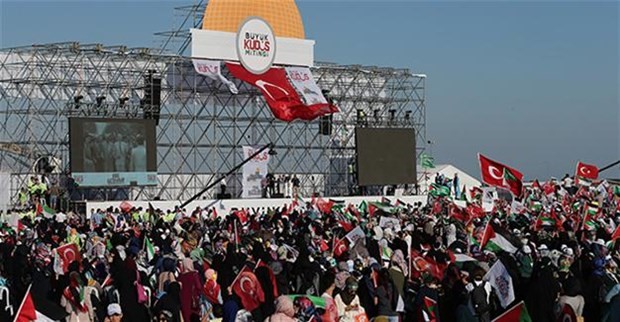 ISTANBUL - Thousands of people rallied in Turkey's largest city on Sunday against security measures Israel has imposed at the Al-Aqsa mosque in Jerusalem, shortly after Israel removed other measures that led to two weeks of violent Palestinian protests.

The rally in Istanbul, called "The Big Jerusalem Meeting" and organized by Turkey's Saadet Party, drew some five thousand people to the Yenikapı parade ground on the southern edge of İstanbul.

Protesters were brought in by buses and ferries from across the city, waved Turkish and Palestinian flags, and held up posters in front of a giant stage where the chairman of the Saadet party and representatives from NGOs addressed the crowd.

"The Al-Aqsa mosque is our honor," read a poster.

"You should know that not only Gaza, but Tel Aviv also has their eyes on this parade ground. Netanyahu does as well, and he is scared", said Saadet Party Chairman Temel Karamollaoğlu, referring to Israeli Prime Minister Benjamin Netanyahu.

Turkey has opposed the security measures installed at the entry points of the mosque compound, with President Tayyip Erdoğan warning Israel that it would suffer most from the dispute.

The dispute over security at the mosque compound - where Israel installed metal detectors at entry points after two police guards were shot dead this month - has touched off the bloodiest clashes between Israelis and Palestinians in years.

On Friday however, the main prayer session at the Al-Aqsa mosque ended relatively calmly after Israel removed the tougher security measures, though it barred entrance to men under age 50.

Israel captured East Jerusalem, including the Old City and the holy compound, in the 1967 Middle East war. It annexed the area in a move that has never been recognized internationally.

Al-Aqsa mosque, Islam's third holiest shrine, sits in the heart of the Old City. It is also the holiest place in Judaism - the venue of two ancient temples, the last destroyed by the Romans. Jews pray under heavy security at the Western Wall at the foot of the elevated plaza.