İsmail Denli, a handicapped citizen who was saved alive from the Suruç massacre of last year, was taken into custody by the police ten days after the incident based on ‘reasonable doubt’. Now having been restrained from receiving his state issued ‘wage for the disabled’ and from using his healthcare benefits as a handicapped person, Denli said: “My only guilt is having participated the meeting in Suruç, where the bombing took place. Instead of finding the perpetrators of the massacre, the state is making the survivors of the massacre pay the price!” 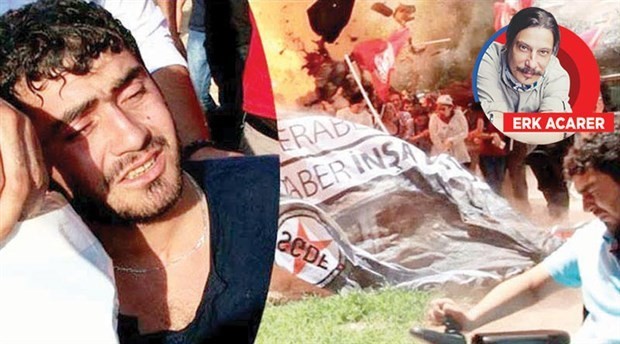 Having been living in Akçakale district of Urfa, İsmail Denli had been in a traffic accident in the past and was left 90% disabled as a result. Going on with his life on the wheel chair and being in need of assistance most of the time, Denli had been receiving healthcare aid and wages from the government as a handicapped citizen. However, earlier in the summer this year, Denli was unable to receive his income as he normally used to get it transferred to his account regularly every month.

Denli’s state-issued wage has been cut

Initially having thought the delay could have been due to the holiday break at that time, Denli waited for the holidays to be over. However, as he had still not received any payment afterwards, he referred the case to the Social Security Authority and found out that his state-issued wage had indeed been cut completely.

Denli was told by the Social Security Authority that he was no longer able to receive his social security benefits because his father owned a car and a house. On the same day that he was given this information, he went to the medical center to get his catheter; however, there, he was also told that his Yeşil Kart (state-issued healthcare card) had also been cancelled.

Denli also wrote a letter to the Social Security Authority about the cancellation of his healthcare; and, he received an answer where the officials told him he ‘had to document his disabilities again’.

Reacting on what he has been experiencing, Denli said the following: “It’s not possible for me to work. The state has abruptly cut off my wage. I had got into an accident 10 years ago; and, I had been receiving handicapped-aid and special healthcare for years since then. So, I ask ‘why not years ago but now?’ They are trying to prevent me from receiving my benefits by showing my father’s income, car, and house as an excuse. What they are doing is contradictory. They compensate my mother for looking after me; they have not cancelled that. And, they say ‘that should be enough.’ I’m 27 years old. The state is telling me that either my father should look after me or I should get married.”

‘If you are not one of us, you have no right to live’

Exclaiming that he actually senses why he is being ripped off from his rights, Denli adds: “I survived the Suruç massacre by a matter of a minute. The bomb had exploded just at the moment when I left the crowd in order to get water. Two of my friends, with whom I had gone to the meeting together, lost their lives. 10 days after the bombing, the police considered me as a suspect based on ‘reasonable doubt’ and they raided my house. I was held in custody at the police station and I testified. My only guilt is having attended the meeting in Suruç. We have already paid heavy prices; but I guess, it is still not enough. They clearly say ‘let’s make the survivors miserable.’ They basically send the message of ‘if you are not one of us, you have no right to live.’ I’m already a victim. How long more will this injustice continue? I request for my rights to be given back immediately!”