Interior Minister of Turkey, Süleyman Soylu, commented on the condition of dismissed educators Nuriye Gülmen and Semih Özakça, who started a hunger strike more than two months ago after their months-long sit-in – held to demand their jobs back – were left not responded by the government officials.

Calling them ‘terrorists’, Soylu said the following: “We don’t send our children to schools so that they would be trained as terrorists... They are trying to portray Nuriye Gülmen as ‘victim’ and ‘sweet’, just like they did in the past with Fehriye Erdal... I’ll tell you who Nuriye Gülmen is. There was a warrant of arrest against her with the reason of her activeness in DHKP-C. She was caught, taken into custody, and arrested. And, after she was released on 1 April 2015, she was taken into custody again during an operation agains the organizaiton. She was then suspended on 10 April 2015. Our friends (officers) have given a long list (of her acts): posting banners; working on behalf of the organization; giving statements on behalf of the organization; and things beyond these. These things wee before state of emergency. It’s written in all records that she was a part of DHKP-C’s network in public sector and she was in the revolutionary group of public workers. So, is this an academic? She had been taken into custody 25 times after the decleration of state of emergency. Then, they went on a hunger strike. They eat and drink and then they go to their site again at 9 in the morning. They go to the doctor and when the doctor does not want to give them a report as they wish, they target the doctor and try lynching him. And the two parties in the parliament (HDP and CHP) try to portray them as innocent. Are we supposed to leave our children’s education up to them?” 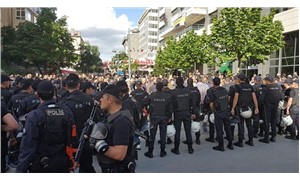 Responding to statements of Soylu from her personal twitter account, Semih Özakça’s wife Esra Özakça wrote: “We ask Çavuşoğlu and Soylu: are you a prosecutor or a judge? Who are you? You’ve done all you can to Nuriye and Semih and now you say ‘we have given the verdict.’ These statements are an open violation of presumption of innocence. We call on prosecutors and judges who see this to act! We are going to file a criminal complaint. Those who made these statements will be responsible for all that Nuriye and Semih will face. And, yes, they have eaten! They have eaten their lives! They’ve eaten their bodies! And, they have melted away cell by cell!”

On Monday, parliamentarians from opposition parties HDP and CHP held a sit-in in front of the Human Rights Statue, where Gülmen and Özakça, along with a group of other dismissed people and their supporters, used to come and stay throughout the day to demand their jobs back.

Currently, the site has been completely blocked by police barricade and entrance to the area is also restricted from streets nearby.