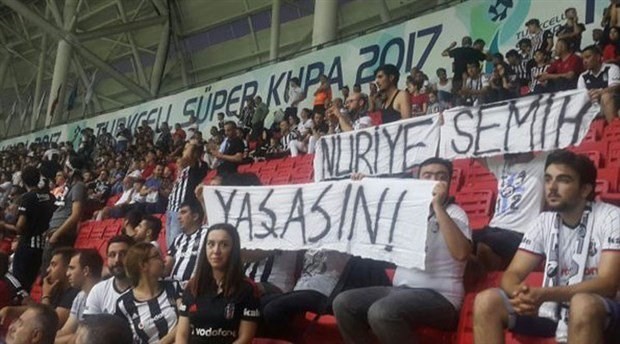 On Sunday (August 6), the soccer match in Turkey between Beşiktaş and Atiker Konyaspor for the Super Cup was marked by a brawl between the fans of the two teams.

As the game played in the Black Sea province of Samsun was ended with a 2-1 victory of Konyaspor, fans of the winning central Anatolian team Atiker Konyaspor chanted slogans accusing the Beşiktaş club and its fans of support to outlawed Kurdistan Workers Party (PKK).

On the other side of the stadium, the dominantly leftist fans of İstanbul’s Beşiktaş sang the famous İzmir Anthem, a song very popular among the secular groups in Turkey.

Chairs, nettings, flammable objects, other kinds of materials, and litter were thrown onto the field, along with a butterfly knife, which was picked up from the ground and given to the referee by Quaresma from Beşiktaş.

Following a prompt investigation launched by the Interior Ministry, Turkey’s Football Federation took disciplinary action against both teams. Atiker Konyaspor has been ordered by the Federation to play its next 5 games without its fans; and, the club has been issued a fine in the amount of 350K TL. As a punishment, Beşiktaş will also play its next game without fans and will have to pay a fine of 100K TL.

Earlier during the week, the Interior Minister Süleyman Soylu and the Minister of Youth and Sports Osman Aşkın Bak held a meeting in Trabzon with relevant officials to review the current security measures regarding sports activities in order ‘to take the necessary steps’ to avoid incidents like the ones experienced on Sunday in Samsun.

While Minister Soylu said ‘sports fields are not the places to do politics’, Ministry Bak said: “We are not going to let anyone politicize the audience in bleachers”.

On Thursday, Governor’s Office of Konya released a statement announcing that the man suspected of throwing the butterfly knife was caught by the police department in Konya and released after his testimony. Meanwhile, a picture of a group of Konyaspor fans where they posed with knives and guns in their hands was spread on social media.

17 fans of Beşiktaş, however, have been issued a warrant of arrest by authorities who accused the fans of ‘terror propping’ because of a banner they held up during the game to stand in solidarity with the dismissed and jailed educators Nuriye Gülmen and Semih Özakça, who have been on a hunger strike for over 150 days to demand their jobs back.

Although the two educators have not been brought before a court to testify, the Chief Public Prosecutor in Samsun – the province where the game was played on Sunday – declared the two educators as ‘DHKP-C militants’ and sought for 17 fans holding a banner in support of the two to be caught and detained.