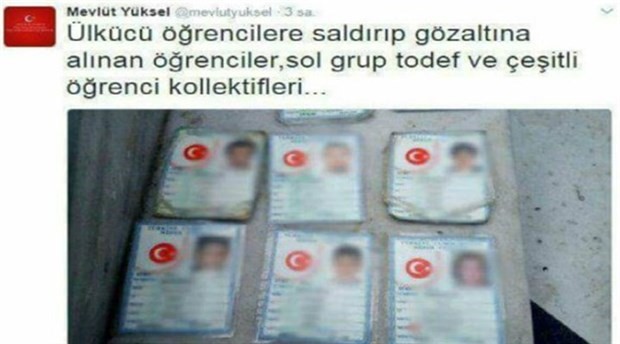 Chief Editor of Turkey’s right-wing Takvim newspaper, Mevlüt Yüksel, had shared an image of ID cards of a group of leftist students from İstanbul University after the students were briefly taken into custody over a brawl between them and a group of aggressive nationalists.

The incident had taken place in February of 2017 and the chief editor Yüksel shared a photo of the IDs – which he had to have got from the police department – of the students and targeted the students with a message under the photo by saying ‘These are the students who attacked nationalist students and then got taken into custody; they are members of leftist group TODEF and various other student groups.’

The targeted group of students was then reported to have been attacked in Eminönü district of İstanbul, near their college campus.

As the lawyers of the students filed a criminal complaint against Mevlüt Yüksel for ‘illegally getting access to and disclosing one’s personal ID information’, the lawsuit launched sought for imprisonment of Yüksel from 3 years to 6 years.

Yüksel is being tried without arrest and his first hearing is scheduled of the end of this year.