Anasayfa BİRGÜN DAİLY Components for an IED to be used in ISIL attack in Australia were sent from Turkey: Australian police
BİRGÜN DAİLY 04.08.2017 13:01

Components for an IED to be used in ISIL attack in Australia were sent from Turkey: Australian police 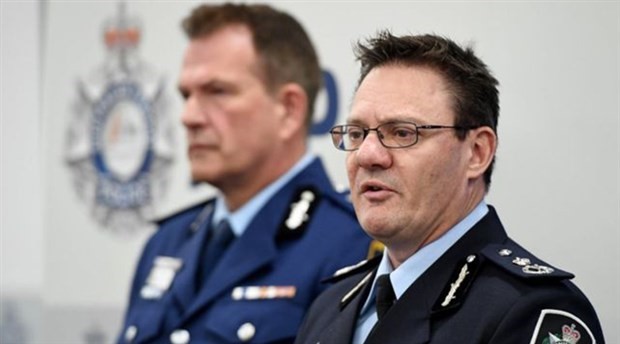 Two men have been charged with building a military-grade explosive device with the help of high-level Islamic State operatives in a foiled terrorist attack that police called “one of the most sophisticated plots attempted on Australian soil”.

Police will allege that components for an improvised explosive device (IED) were sent to Australia in air cargo from Turkey via Isis operatives in Syria. Two men, who remained in custody after facing court on Friday, then allegedly assembled the devices with instruction from “a senior Isis operative”, according to the Australian federal police deputy commissioner Mike Phelan.

Officers will also allege the men began construction on an “improvised chemical dispersion device” designed to release highly toxic hydrogen sulphide but it was not close to completion.

The remaining two men, Khaled Mahmoud Khayat, 49, of Lakemba, and Mahmoud Khayat, 32, of Punchbowl, have been charged with acts in preparation of a terrorist act. Police confirmed that one of the men was the brother of a known Isis operative.

Police will allege that the men planned to place the IED on an Etihad flight out of Sydney airport on 15 July. But told reporters on Friday the device had not breached airport security and did not even enter screening processes.“It didn’t even get past the check-in,” he said. “It did not make it as far as security.” He said he was “extremely confident” the IED would have been detected by standard airport security.

Police would not say why the men did not proceed with the plan.

They will allege that the men began communication with the overseas Isis operatives in April after being introduced by the brother of one of the men, who was in Syria.

Speaking in Perth, the federal justice minister, Michael Keenan, said the news would lead to increased screening for air cargo.

“We’ve taken measures to improve screening and [immigration and border protection] minister Dutton will continue to assess what we learned from this particular plot,” he said.

“This is the 13th time that we have been able to stop a terrorist attack from occurring on Australian soil in the past three years. With every successful disruption that we have, we learn the lessons from that.”

In Sydney Phelan stressed that the chemical device was in its early stages.

“I want to make it quite clear that we were a long way from a functional device,” he said. “There is no evidence at all that that device was completed. We believe we have completely disrupted this plot.”

He praised the action of AFP and New South Wales officers: “We could very well have had a catastrophic event in this country.”

The NSW deputy commissioner Dave Hudson said there was no “residual threat” to the state. “We are very confident we have extinguished this threat,” he said.

Hudson said two more search warrants would be executed within the next 48 hours.

The two men who have been charged appeared in Parramatta local court via video link on Friday and did not enter an application for bail, which was formally refused.