Operations of Turkey’s authorities against a group of soccer fans who held up a banner saying ‘Nuriye and Semih shall live’ continued on Wednesday (August 16) morning.

While a fan was arrested earlier during the week, police took into custody 5 more people in Ankara, according to reports of Turkey’s online news portal soL. 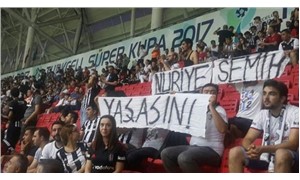 The fans had held the banner, which the authorities deem as ‘terror propaganda’, during the recent Beşiktaş-Konyaspor game, where a major brawl took place between the fans in the stadium in Samsun as the Konyaspor supporters called the other side’s fans ‘terrorists’.

Though an investigation into the brawl was started by the Interior Ministry promptly after the incident and management of both clubs were punished by Turkey’s Football Federation, the Konyaspor fans who had appeared in photos with knives and guns were not sought after by the security, while the banner held by Beşiktaş supporters led the fans to get arrested and taken into custody.

A fan of Konyaspor who had thrown a butterfly knife to the field during the game was also released after having given a testimony with the police.