CHP Ankara MP Ali Haydar Hakverdi has stated that houses of some of the Alevi and Kurdish families have been marked in Mamak. Pir Sultan Abdal Culture Association’s Ankara Branch President Ali Üngörmüş also pointed out that the families feel worried and uneasy. 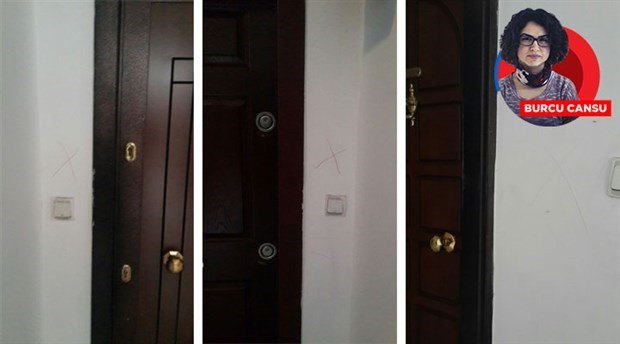 In Ankara’s Mamak district, in an apartment building with 20 flats, houses of 7 Alevi families and 1 Kurdish family have been marked with an X. Having seen the marks next to their house doors in the morning before going to work, some of the families went to Pir Sultan Abdal Culture Association’s Ankara branch and told about it to branch president Ali Üngörmüş.

Üngörmüş went to the apartment building with the families and was also told that the houses had probably been marked at night as the families had not seen them the day before. Additionally, he was informed that one of the houses that had not been marked earlier in the morning was found to be marked later during the day.

Underlining that these families feel uneasy and worried, Üngörmüş said that the families had initially thought the marks might have been done by children randomly. However, then, they realized that only the doors of Alevi and Kurdish families, at different floors, were marked in the apartment building.

CHP MP from Ankara Ali Haydar Hakverdi announced the incident from his official Twitter account by saying: “Last night, house of Alevi and Kurdish families were marked in Mamak, Ankara. With Pir Sultan Abdal Culture Association Ankara Branch President Ali Üngörmüş, we talked to the families whose houses have been marked. They are worried; officials must immediately act in order for those responsible to be found out. We are not going to give way to attacks against peace and solidarity.”

Perpetrators are not found!

In his statements given to BirGün, CHP MP Hakverdi has reminded that those carrying out these kinds of acts have never been caught so far. Hakverdi added: “These are acts that we have been witnessing frequently in towns where many Alevi families live. AKP government has been slurring over the issue by arguing ‘it is probably an act of children’. But we know of these marks from Maraş, from Çorum. So, we call out to the officials: find those people that come to our doorsteps and stop protecting them!”