The Justice March of the opposition in Turkey has taken politics from the parliament out to the streets. And, this has marked the end of the one-sided game of Erdoğan. 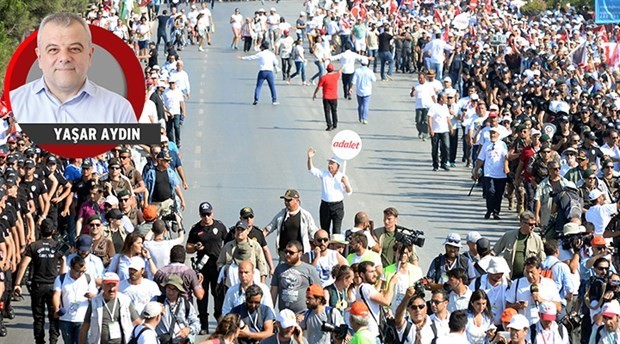 The Justice March in Turkey that was started by the Chair of CHP, Kemal Kılıçdaroğlu, ended on July 9. There will undoubtedly be debates and evaluations with regards to its results and the steps to be taken from this point on. However, what we can say surely is that this march has left permanent marks in politics in Ankara.

Erdoğan and AKP had difficult times in determining their position in the face of the Justice March. Having remained silent about it throughout the first of the march, the head of the AKP, Recep Tayyip Erdoğan, began speaking harshly about it. However, even then, he could not have the courage to take a firm stand against it. We know that the Justice March was in the agenda of the executive board meeting of AKP and the meeting of the Council of Ministers. In fact, it was also reported that there were claims about AKP’s plans to stop the march through intervention of police force.

The most significant impact of the march on the internal discussions of AKP was observed during the broadened meeting of the provincial heads of AKP. During that meeting, Erdoğan most frequently used the terms ‘change and dynamism’. It echoed the alarm bells ringing within AKP, which has been experiencing a major decline in performance as even Erdoğan had to admit and address it.

The plan of Erdoğan against the opposition was very clear. He was going to change the by-laws of the parliament and restrict the opposition even further. But the Justice March has also stood as an obstacle to this plan. The politics in Ankara, which had been cornered between the referendum results and the parliament, were putting Erdoğan at such an unbeatable position especially with the aid of the state of emergency decrees. However, the Justice March, was the loudest voice heard from the streets since the uprising during the Gezi Park protests back in June of 2013. And, the March has caught Erdoğan off guard.

According to information we get from AKP lobby, this new stage has a significant place in Erdoğan’s agenda now. And, steps to be taken are still causing arguments within AKP. Two options are mainly being discussed among AKP members, we’ve been told: first is to convince Erdoğan to leave at least some ground that would allow dialogue with CHP; and, the second is to lead the path without compromising. The final decision will be made by Erdoğan himself. But to see this, we will have to wait until the July 15 commemoration ceremonies finish. Erdoğan will try to minimize the impact of the Justice March, as well as the impact of the July 15 commemoration, and start taking steps afterwards.

The Justice March also crystallized the other groups in support of Erdoğan. It was almost officially declared that the closest pal of Erdoğan nowadays is the head of the Nationalist Movement Party (MHP), Devlet Bahçeli, followed with Doğu Perinçek (head of Vatan Party) and Mustafa Destici (head of Grand Unity Party). These three figures lined up behind Erdoğan with their supporting statements and their criticism of the March…

The 25 days spent on the road have impacted CHP the most, certainly. A party that usually has internal disputes and emergency meetings, the main opposition CHP has this time become the party that determined the agenda in the country’s politics throughout the whole month. And, it even held its meetings on the road. We can in a way assert that this was the first time since 1970’s – except the time when SHP was established – that social democrats in the country have influenced the course of events in the country this effectively. On top of that, this was done under the leadership of a chair who had so often been criticized for being ineffective.

As Kılıçdaroğlu himself stated during the rally in Maltepe, ‘this is only the beginning’.

The most significant criticism expressed by CHP and HDP since the aftermath of the failed coup attempt of 2016 was on the state of emergency laws and decrees turned the parliament into a nonfunctional showpiece. The parties with seats in the parliament had become completely unable to be effective.

The Justice March, however, has taken the politics out from the hallways of the parliament and spread it on streets. And, this new stage has marked the end of the one-sided game of Erdoğan. On the other side of the game field, there is now the masses of the Haziran (June) Movement who had emerged in the Gezi Protests and who had said in the April 16 referendum ‘we have not died yet’. The March has demonstrated that there are indeed millions of people on the other side.

Front-page article of BirGün published on 11 July 2017, Tuesday with the title of 'Justice March ruins the plans of government'