May Day marches held in Turkey under strict security measures: 165 taken into custody 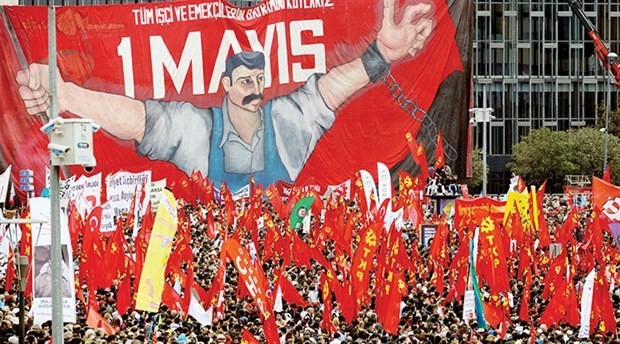 May Day marches and demonstrations in Turkey were held today (May 1) in over 20 big cities of the country in all regions, including the capital Ankara.

Turkey’s authorities had previously announced that strict security measures would be taken in these cities throughout the day. It’s been reported that around 30,000 police officers were on duty just in İstanbul, where Taksim Square – a spot in downtown that is famous and symbolic of major demonstrations and marches – was blocked for assembling until late hours of the evening.

(Photo shared by journalist Ceyda Karan on social media at 20:48 on Monday, May 1st)

Common message of the workers: 'No to sultanate'

Thousands of people began their marches and celebrations in major city squares by early morning hours. Crowds grew throughout the day. In addition to their message for labor rights, equality, and justice, another common message of the participants of the marches everywhere was 'no to sultanate'.

While the demonstration in İstanbul took place in the Bakırköy district of the European side, people trying to enter Taksim Square to hold a demonstration were taken into custody by police.

According to earliest reports of the morning, two women who tried saying slogans at Taksim Square were forcefully taken into custody, which was then followed with clashes between security forces and several other demonstrators around the banned site.

Several people were taken into custody in İstanbul’s Beşiktaş district, as well as in other sites. While participants of the march in Beşiktaş tried heading towards Taksim Square and began saying slogans, such as ‘no to enslavement; time for emancipation’, police attacked using tear gas and took into custody over a hundred of participants.

As relatives of those who were taken into custody could not find out which district the police took them, lawyers went to İstanbul’s Çağlayan Courthouse in the afternoon hours to submit a letter of request for finding out the whereabouts of the demonstrators. The two prosecutors on duty, however, refused accepting their letter by saying ‘they do not deal with lawyers’.

Governor's office of İsanbul rmade a statement informing the public later in the day that 165 people were taken into custody in İstanbul during the demonstrations, though ealier reports indicated it was over 200 people.

(Police in Beşiktaş district of İstanbul uses force against demonstrators)

Victims of Ankara massacre commemorated before the march

Before the starting of the marches in Ankara, a commemoration ceremony was held in front of the historic Ankara Train Station, where 103 participants of the Peace March were killed and hundreds of others were injured severely in the devastating suicide attack of ISIL in 2015.

(Victims of Ankara massacre commemorated with messages of peace)

Certain expressions and Kurdish slogans not allowed in some cities

Police in Ankara, İstanbul, and Diyarbakır did not allow banners that included messages against the ongoing state of emergency, executive decrees, and the dictatorship in the country to be entered into the demonstration site.

Banners with messages of peace and justice that were written in Kurdish were not taken to the demonstration site in Diyarbakır.

(Police ask certain words and phrases - state of emergency, dictator, decree - to be crossed off from banners)