Message of Turkey’s hunger-striking educators from jail: ‘Authorities are nervous’

For over four months, Gülmen and Özakça have been on a hunger strike which they started to demand their jobs back and they were arrested in a dawn operation of the police that raided their houses in May.

MP Altıok gave a statement following her visit and said: “Even the Human Rights Statue is under blockade and arrested! Having stood there (in front of the Statue) for 75 days – while on a hunger strike – without giving harm to anybody and seeking to get their rights, Nuriye Gülmen and Semih Özakça were first taken into custody and then arrested in an unbeliavably unjust way... I visited them in prison on the 120th day of their hunger strike, after I had left from the Justice March. And, now, I am going back to the March by saying ‘Justice for Nuriye and Semih’”.

Altıok also criticized the Justice Minister Bekir Bozdağ’s claims about Gülmen and Özakça’s health ‘being fine and without a critical risk.’

‘They are not even permitted to be seen by their doctors. How could the Justice Minister assert such things?’ Altıok said in despair.

Gülmen and Özakça have been refusing to be treated by the prison doctors and demanded to see their own doctors, however, the authorities have not permitted it. A letter has been forwarded to the justice minister and the head of the human rights committee of the parliament about the issue, MP said.

Gülmen said in her message: “Our resistance is at times perceived as if it is only about us, since it firstly involves our lives. But that’s not the case. We are doing this (hunger strike) against all unlawful decress and all injustices. Our resistance is an obligaiton! We have been subjected to a prolonged oppression done by various kinds of methods. So, this resistance has become mandatory as no other alternative was left. We know what we are faced with. We know that there is a wall before us. But we are going to break down that wall. There was a need for a stronger and more effective resistance. Now we see that our voice is heard! We’ve also got the support of the people. And, this support and increasing demands are causing the government to get worried!”

Gülmen also mentioned her deteriorating health in her message and said the prison conditions make it much more harder for her to ‘live’ since she gets ‘severe pain in bones and muscles.’ 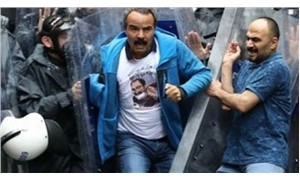 Also pointing out the tension their resistance has caused on the government, Semih Özakça said in his message: “There is a psychological pressure at play. They (authorities) are trying to push people into hopelessness and a deadlock. The government officials are extremely nervous. They send a doctor here every other day. The guardians and the managers here monitor us too frequently. It is obvious that they’re ordered to do so because they know that our health is getting worse. My demand is clear: we should be seen by our own doctors or doctors who are not dependent (on authorities). This demand must be met! We requested to be seen by our own doctors twice but we could not get an approval.”