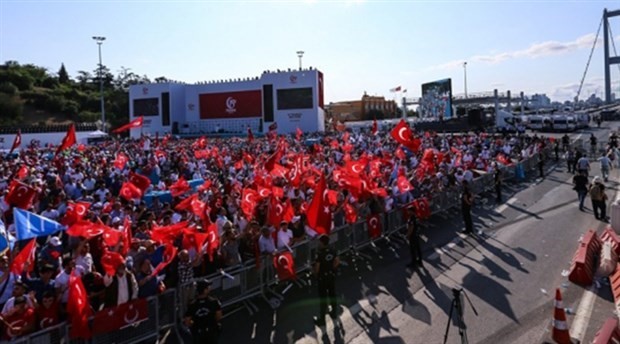 Commemoration activities and ceremonies for the first year anniversary of the failed coup in Turkey have been held in Turkey at various platforms throughout the week.

Today, on July 15, after the special session held at Turkey’s parliament, government officials have arrived in İstanbul to attend the ceremonies at the Bosporus Bridge, which has been referred to as the ‘July 15 Martyrs Bridge’ since last year.

At around 20:00, Prime Minister Binali Yıldırım and several ministers began walking to the bridge from the nearby town of Çengelköy at the Asian side of İstanbul.

President Erdoğan is expected to attend the site of ceremony after 21:00 to deliver his speech and commemorate the people who had come out to streets on the night of the coup attempt and lost their lives as a result of attack by a group of soldiers who had been stationed at the entrance of the bridge with tanks and arms.

Thousands gathered around Çengelköy and Altunizade towns to start a ‘National Unity March’ at around 18:00. The large crowd walked to the site on the Bosporus Bridge to attend the ceremony.