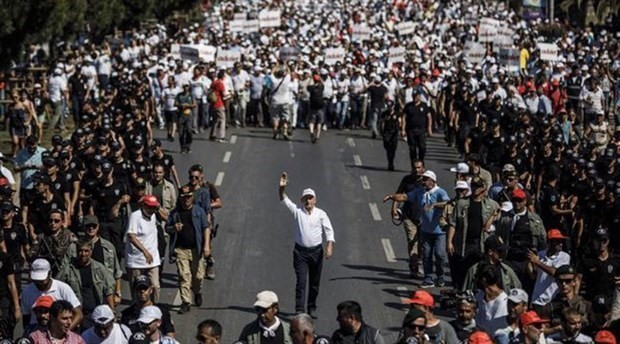 The Justice March in Turkey, which was started in Ankara with the call of the main opposition CHP’ chair Kemal Kılıçdaroğlu in response to the arrest of CHP MP Enis Berberoğlu, ended in İstanbul on its 25th day with a final Justice Meeting held in Maltepe square. Tens of thousands of people who had joined the march met with over 2 million people in Maltepe.

In addition to political parties, labor and democracy forces, trade unions, civil society institutions, and artists, citizens of all ages who had come to Maltepe from not only other parts of İstanbul but from various places of the country protested the injustices experienced under AKP policies and demanded ‘justice.’

The last phase of the march was held with Kılıçdaroğlu walking from Dragos to the meeting site in Maltepe, again with a placard in hand reading ‘Adalet’, meaning ‘Justice’. As Kılıçdaroğlu started marching, at 16:30, for the last phase before reaching Maltepe, party members, citizens, and wife and daughter of the jailed CHP MP Enis Berberoğlu also walked along with him.

Kılıçdaroğlu walked the last kilometer by himself, as the anthem of the Justice March was played in the background. Groups representing civil society institutions, political parties, and labor and democracy forces also marched to the meeting site in crowds from other routes.

The big crowd frequently chanted ‘rights, law, justice’, as the CHP leader reached the stage, which had a big flag of Turkey on one side and a poster of founding president of the Republic, Mustafa Kemal Atatürk.

CHP press office announced that 680 journalists – both from Turkey and abroad - got accreditation to be present at the meeting site.

Istanbulites came to the site using both the sea route and the land routes. Boats and buses had left early in the morning from nearly 1000 towns across İstanbul. The security measures were at highest level as everyone had to go through the check points before entering the square.

İstanbul’s Governor Vasip Şahin announced in the afternoon, 15000 police officers were on duty for the meeting.

While waiting for Kılıçaroğlu to come on stage, people sang songs, danced, and chanted the motto of the march: ‘rights, law, justice’.

Front-page article of BirGün published on 10 July 2017, Monday with the headline of 'These folks never surrender!'