Mosul operation has started; and, the crisis between Ankara, Washington, Baghdad, and Erbil has been overcome through bargaining behind the closed doors. We have pointed out the details of the equation and balance of power in Mosul operation in 10 items. 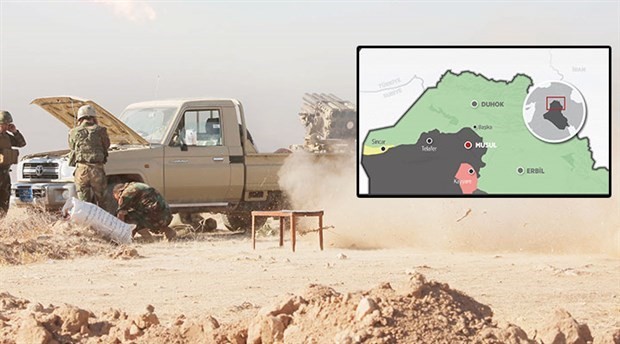 The operation launched for ‘liberation of Mosul’, which has been under the control of ISIL forces for the past two years, has officially been started. The crisis which was caused by the disagreements between Ankara, Washington, Baghdad and Erbil with regards to who and which forces were to enter the city and how authority was to be assigned has been resolved through the bargaining held behind closed doors. We are presenting here the key points and behind the scene calculations of the Mosul operation, from which Turkey has been excluded.

1-Why is Mosul the reason of crisis?

Mosul is a city in northern Iraq with strategic oil reserves. The reason for the crisis between Ankara, Baghdad, Erbil, Tehran, and Washington, which has led to a regional polarization, is in regards to how authority will be distributed and assigned after ISIL forces are completely out of the picture in the city. Because of the disagreements on which powers were to enter the city and how power was to be allocated, launching of the operation had been dragged ‘till now. The Iraqi state, Kurdish regional government, Sunni-Arab tribes, Shia forces, USA, Russia, Turkey, and Saudi Arabia are in a search to have a say in the ruling of the city.

2-Who is joining the operation?

Iraqi army, Peshmerga, the Nineveh Guards, and Shia militia – though not openly declared – are taking part in the operation. Nineveh Guards have been formed by Turkey recently and it consists of Sunni-Arab militia which Ankara trained in Bashiqa, where the presence of Turkey caused it to have a crisis with Iraqi government. On the other hand, the coalition forces, which include USA and France, give support from air to the troops on ground. When announcing the declaration of operation in Mosul, Iraqi Prime Minister Haidar Abadi stated that only Iraqi army and police forces were to ender the city on ground.

3-How is Mosul to be divided?

It’s still uncertain what Mosul’s status will be like once it is cleared of ISIL forces completely. There is a serious disagreement among the powers that desire to have a gain from the operation. Although there are various scenarios about how the city will be divided up and ruled – even, including one where the city would be autonomous - , the option that still remains dominant is for Iraqi government to have full autonomy over the city. When asked about ‘whether an agreement was reached for the aftermath of the operation or not’, Barzani answered: “We also wanted to have such a political plan, however, the other side – Baghdad – firstly wanted the operation to be started. If any problems emerge in the future, we would like to solve them with Baghdad.”

Baghdad wants the city to be under its own rule. Meanwhile, Sunni-Arabs are against Shias’ to have a say, and, Shia’s stand is the same against Sunnis. Turkey is claiming a ‘historical right’ over the city and trying to get involved through its contacts with Sunni-Arabs. Kurdistan Regional Government has come to an agreement with Baghdat on the Kurdish regions that are under the authority of Iraqi government de facto but dwelled by Peshmerga forces. USA is on the side of Iraq in the crisis between Ankara and Baghdad. On the other hand, trying to avoid having USA and Iraq against itself, Erbil wants Turkey to reach an agreement with Iraq despite all the problems it has with Baghdad. Iran is also a significant power in the Mosul equation in regards to Baghdad government and Shias.

5-Why is Turkey out of the table?

Though Erdoğan says ‘we are going to be both in the operation and on the table’, Ankara’s sectarian policies and its claim on the Mosul have ‘for now’ caused Turkey to be excluded from this equation. Ankara desires to take part on the table at all costs, however, its sectarian approach is bothersome for other parties in the equation. Iraqi government, Shia militia, and even certain Sunni tribes do not want Turkey in the picture both because its presence stands as an interference with sovereignty of Iraq and because it has been leading sectarian policies. All the while, Turkey and Saudi Arabia are bothered by Shia forces joining the operation since they see it as a boost of Iran’s influence. Turkey is also strictly against the participation of Shingal Resistance Units in the operation based on the reasoning that it would give more power to PKK.

6-Where are ISIL forces going to go to?

Another major question is with regards to where the ISIL forces will go about after being cleared out of the city of Mosul. Iraqi officials and Kurdish forces have announced that the west gateway of the city was to be left open for ISIL militants to flee the city and enter Syria. Currently, it is estimated that about 7000 jihadists dwell in the city, where the civilian population dropped dramatically after it had been seized by ISIL. Allowing these militants to enter Raqqa would cause further complications in Syria. The leader of Hezbollah – a signficant actor in Lebenon – Hassan Nasrallah has also warned about ISIL members retreating to the east of Syria. Arguing that there should not be an escape route, the Shia leader called out to Iraqi officials and said: ‘Don’t be tricked by the USA!’

7-What is next after Mosul?

At the end of the Mosul operation, ISIL will be out of Iraq completely. After that, focus willl be put on the Raqqa operation. And, once Raqqa – the claimed capital of ISIL – is wiped out of ISIL members, the group will be left out without a ‘territory.’ At that point, it might resort to a mobile strategy leaving its current settlements; and, it can continue its attacks with its militants spread out all across the world.

8-Would the position of Turkey on the table change?

Positions taken up on the slippery ground of the Middle East may often change suddenly. Though excluding from the table for now, Turkey might be included within the next few days. That depends on Turkey’s power of bargaining. Though Turkey had been excluded from the talks over Syria until very recently, it found itself on the table again after coming to terms with Russia. Barzani also suggested the same by saying: ‘If Ankara wants to join the operation, it should reach an agreement with Baghdad’.

9-Turkey’s A and B plans didn’t work out; would plan C work?

Turkey had annoucned before the start of the Mosul operation that it had plans A,B, and C. Plan A was to join the operation. However, when the operation began, it found itself ‘neither in the operation, nor on the table.’ In light of this, Ankara wanted to put plan B in force. And, that was to intervene in Mosul through Erbil. As Barzani demanded Ankara to come to terms with Bagdad, plan B also faded away. So, now, only plan C is left. And, that is to mobilize Sunni-Arab tribes. Leaders of about 400 Sunni tribes throughout Iraq had held a press conference in Erbil before the operation, in order to support for Turkey.

10-Why is Russia unreactive?

Russia’s priority is its long-time friend Syria! This is why Kremlin is not really active in Mosul as much as it has been over Aleppo. For Russia, developments in Syria, where their last remaining overseas military base is located, are much more vital. Through a covert agreement reached with Washington, Iraq is left out to USA. While Russia is intensifying its operations in Aleppo, at the same time, it is also building a strategy against jihadists who are likely to flee Mosul and enter Syria.