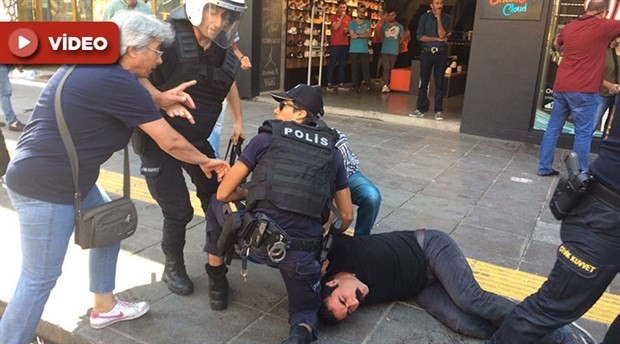 On the 137th day of the hunger-strike of two dismissed and jailed teachers in Turkey, Nuriye Gülmen and Semih Özakça, people who gathered in Ankara’s Güvenpark with the call of the Solidarity Platform for Nuriye and Semih got attacked by police. Including 7 lawyers, 43 people got taken into custody.

As the small square in front of Human Rights Statue in Ankara’s Kızılay – also near Güvenpark – had been under strict police blockade since the arrest of the two educators in May, human rights defenders and the family and friends of the dismissed workers who held a daily demonstration to read a press statement in demand of release of Gülmen and Özakça – and, other victims of state of emergency laws – have faced with brutal intervention of security forces, with a number of protestors getting taken into custody. Some, including the wife of Semih, Esra Özakça, have been put on house arrest.

With the latest call of the Solidarity Platform, several people had intended to come to Ankara from İstanbul. As the buses carrying those rights defenders and concerned citizens were stopped by security forces who did not allow the busses to go to Ankara, the demonstration of the Platform was postponed to today (July 23). More busses were stopped at the entrance of Ankara on Sunday and they were taken – without the consent of the people – to the province of Bolu.