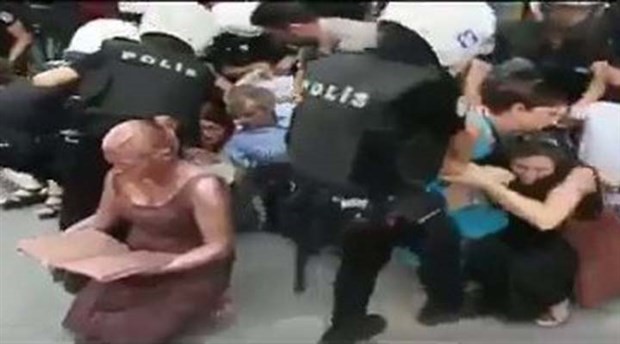 As a group of people gathered at a central square in Kadıköy district of Turkey’s İstanbul on Friday to protest against the imprisonment of dismissed educators Nuriye Gülmen and Semih Özakça who have been on a hunger strike in demand of their jobs back, police intervened against the protesters who had started a sit-in as their short march was not allowed by authorities.

Over 30 people, including representatives from human rights groups and other civil society organizations, were taken into custody.

Among those who were held in custody was an artist who took part in the demonstration as a living statue mimicking the Human Rights Statue on Yüksel Street of Ankara, where the jailed educators had been holding their sit-in prior to their detention.

While video images showing the violent intervention of officers with protesters went viral on social media, the scene where officers confuse the living statue with a real statue, overlooking it while dragging other protesters, got the attention of many.

The artist, who was eventually taken into custody, later posted a message from her social media account, saying: “I have been released, wishing for the same for the Human Rights Statue in Ankara”.