The positions in Turkey’s state institutions that were left vacant after dismissal of a great number of people in scope of investigations into Fethullah Gülen’s movement have now been given to many other religious groups and foundations. After the failed coup of July 15, the impact and roles of religious organizations within the State have actually got broadened. 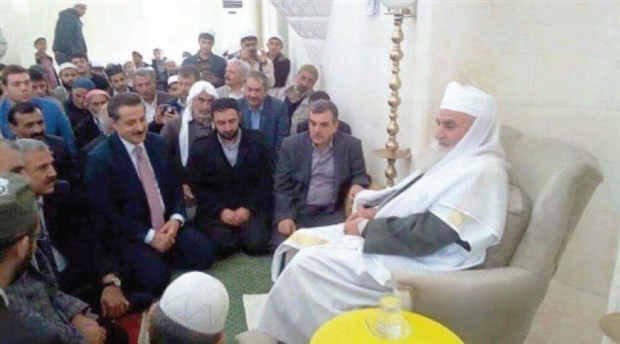 Members of new religious organizations and foundations have been taking the place of those who were dismissed from their public positions in scope of the purge launched after the bloody coup attempt of the ruling party AKP’s long-time partner FETÖ. While the fight for power that AKP and its partner FETÖ – with whom it had ruled the country for many years – got into led Turkey to the edge of a coup, the positions in public institutions that had once been occupied by AKP’s former partner are once again being filled with other religious groups and cults.

The positions held by members of the Gülen Movement – which is now referred to as the Fethullahist Terrorist Organization (FETÖ) – in state institutions used to account to 15% in 2002, the year when the Justice and Development Party (AKP) came to power. This ratio more than doubled throughout the 15 years long rule of AKP and reached 35%. As the members of the Cemaat (Fethullah Gülen’s Hizmet movement) who had been placed in various state institutions got dismissed after the coup attempted on 15 July 2016, other religious groups have become eager to take their places.

As BirGün, we have prepared a short report on religious groups in Turkey known for their current influence on a range of institutions from fields of education and health to tourism and culture.

Having been active – though in a more clandestine manner - since the Republic was founded, the Süleymancılar group became visible in public sphere following former President Turgut Özal’s revisions on religion education. Süleymancılar resembles the Gülen Movement in the sense that they get closely involved in politics.

Though they had lost influence for some time in the past, Süleymancılar group has nevertheless kept its existence especially through their activities on teaching of the Koran and strict devotion to the ‘hijab’.

The fight between the ruling AKP and its former partner Gülen Movement has benefitted the Süleymancılar significantly. Now, the positions in public institutions of the education fields – especially in the Ministry of National Education - that were left vacant as members of the Gülen Movement were dismissed are being filled up by members of Süleymancılar.

While the estimated number of private dormitories run by the Süleymancılar across the country is more than 2000, it is also known that these dormitories are used as places for providing religion education – on Islam – to children.

The protocol on ‘Values Education’ signed between the Ministry of National Education and the Süleymancılar gives the group the chance to impose its reactionary ideology to students at seminars organized in public schools.

A fire that caused 11 children to die at a dormitory in Aladağ district of the southern province of Adana is one of the most recent incidents that once again revealed the support of the government to this group, which had owned and run the dormitory building that burned down last year due to neglect and lack of inspections.

Another religious group whose name has been heard quite frequently after the separation of AKP and the Gülenists is the Menzil Cult, which has several radio and TV channels. Different from Gülen Movement, the Süleymancılar group focuses on adults who are financially somewhat well-off. And, the group also publishes a journal named ‘Semerkand’.

A branch of the Nakshibendi cult, the Menzil, was the first religious group to side with Erdoğan who called on to the religious organizations in the country and told them to ‘make a choice between AKP or Gülenists’ after the followers of Fethullah Gülen attempted a coup on July 15.

A cult which is dominantly joined by small-business owners, the Menzil was initiallly founded in Adıyaman but has now spread across the whole country. The cult has around 150 private dormitories across the country under the name of ‘Semerkand Student Dormitories’. The leaders of the group are called ‘Gavs’; and, the group also has a book they refer to with the title of ‘Minah’.

It is also the group that is thought to have influenced the former head of Diyanet (Presidency of Religion Affairs) Mehmet Görmez to leave his position and retire.

Legislation of a regulation that made blood letting and leeching a practice legally protected as a ‘traditional medical practices’ is believe to have been passed with the lobbying of the Menzil. The placement of signs in hospitals that show the direction to Mecca and the placement of the Koran and a book titled as ‘Life of Prophet Mohammed’ are also widely asserted to be a move that has become a norm with the influence of Menzil.

İsmailağa Community is widely remembered for pictures where its leader Mahmut Ustaosmanoğlu appeared next to buraucrats from AKP. It is also among the religious groups in Turkey that gained further share within state institutions after the purge.

Although one of its leading figures, Ahmet Mahmut Ünlü, has become quite popular through media in Turkey and portrayed a picture quite different than that of the Gülen Movement, it has still had a role in the regression of education system from scientific and secular principles.

Also known for its dormitories spread nation-wide under the name of ‘Marifet (Skill) Association’, İsmailağa is the most active group in Turkey that follows a path similar to that of Nakshibendi. Although the group’s members are mostly uneducated individuals and they do not have effective roles within state institutions, its impact is broadened through Koran courses and dormitories.

Despite reactions, the İsmailağa Group was granted a large land in İstanbul’s Beykoz district last year. There is now an Islamic high school for girls on that disputed land.

Today, the group is again taking the lead compared to other religious structures in terms of having their members take on significant roles in state institutions where many positions have been vacated with a purge.

During the term of former PM Ahmet Davutoğlu, members of Malatyalılar got placed in positions in state radio and television institution TRT and the Foreign Ministry. They are also known for their influence in the management of İnönü University.

The Hamiyet (Zeal) and İrfan (Wisdom) Foundation – abbreviated as AHİ in Turkish – was founded in Ankara in 2006. It has expanded its impact since the partnership between Güllenists and AKP members began to shatter in 2013.

The AHİ group, which has signed a protocol with both the Ministry of Family and Social Policies and the Directorate of Ministry of Education in Ankara, has several dormitories for students in major cities, such as Ankara, İstanbul, Konya, and İzmir.

The official statement of objective for the protocol signed with the Ministry is stated on the website of AHİ as the following: ‘To open houses for children; to contribute to the psychosocial and physical development of children; and, to organize all sorts of projects and social activities in line with the aim of achieving high beneficial results, in partnership with the Ministry’

The AHİ Foundation was granted a land in Batıkent district of the capital city of Ankara by the Cosmopolitan Municipality of Ankara. There is now a dormitory on this land. The dormitory, which has no sign outside and has a high concrete wall surrounding its yard, has caused public reaction in the district.

While a great number of schools and other educational institutions of the Gülenists was shutdown after the coup attempt, AKP govenment has continued its preference to grant the education fields to the hands of other religious foundations and communities. The Ensar Foundation, which is widely known for its involvement in the scandolous child abuse case in Karaman, is among the religious group that the Ministry of Education has signed a protocol with.

The protocol signed with Ensar allows the foundation to be active not only in primary and secondary education but also in tertiary and higher levels. Among the auhorities granted to Ensar with the latest protocol are opening courses in fields of arts, sports, culture, science, and technology; organizing field trips and camps; taking part in selection of educational programs and books; and, even assigning teachers from its own organization when it is requested by the Ministry.

Another association that the Ministry of National Education has granted a significant role in the field of education to is TÜGVA, the Youth Foundation of Turkey.

Association for Spreading Knowledge and the Unity Foundation

The Association for Spreading Knowledge (İlim Yayma Cemiyeti) and Unity Foundation (Birlik Vakfı) are two other religious groups that have been given an active role in organizing a variety of activities for students.

While the Association has a total of 142 dormitories, the Foundation runs aroundn 200 across the country.

Front-page article of BirGün published on 11 August 2017, Friday with the headline of 'New religious groups are growing big within the State'