Anasayfa BİRGÜN DAİLY Scandalous remarks of a theologian in Turkey: ‘Women would get beat up, if they eat on streets in Ramadan’

Scandalous remarks of a theologian in Turkey: ‘Women would get beat up, if they eat on streets in Ramadan’ 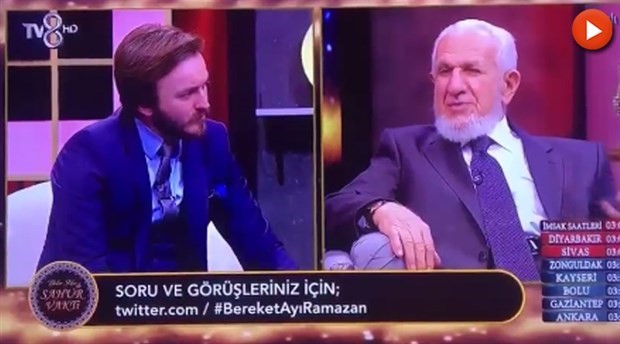 On a national TV channel in Turkey, a guest at a show made scandalous remarks about ‘women who eat outside during Ramadan while they’re not fasting due to being on menstruation.’

As the host Bekir Köse asked the guest speaker, professor of theology Cevat Akşit, about ‘eating outside during the month of Ramadan’, Akşit said those who are not fasting should not eat in public during the fasting hours of the day and added that women who ‘are not fasting due to menstruation’ cannot eat out in public, either.

Akşit said: “Those women on menstruating cannot be eating food on streets just because they are not fasting that day. If they do, they might get beat up! They should eat secretly!”

MP from main opposition, Tur Yıldız Biçer, reacted against the remarks strongly and submitted a complaint about it to Turkey’s Council of Radio and Television (RTÜK).

Stating that these kinds of remarks are heard every Ramadan, Biçer criticized the TV channels that host and praise guests ‘who rationalize and trigger violence against women.’

“Those who are responsible for violence against women and their killings are definitely these people”, Biçer said, reminding on a comment of another religious figure who said pregnant women should not walk out on streets in public.