Sivas massacre: a crime against humanity not served justice for 23 years 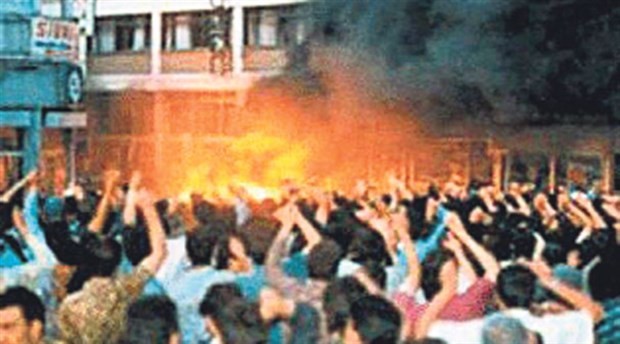 What took place on 2 July 1993 in Sivas is still one of the most unsettling incidents of massacres of civilians in Turkey’s history. 33 of the intellects and artists who had gone to Sivas 23 years ago for Pir Sultan Abdal Festival lost their lives as a result of the devastating attack of the Salafists. Today, 23 years later, the fire burning inside Madımak Hotel on that day and the prosecution process of the case, which had been left incomplete under the protection of bigot administrations, are actually still as live as it could be.

The case, which involved suspects that were either not found or tucked away and that had plea bargains, was then dropped with the verdict of unmet statute of limitations. Its last phase will come on stage within the next days at the Constitutional Court. However, it is now revealed that one of the judges that will be hearing the case was also the lawyer of one of the suspects of the massacre. And, this, once again brings forth questions on the soundness of the trial process. The notes of lawyer and CHP Ankara MP Şenal Sarıhan, who has been watching on this process since the very first day, lay bare how the suspects were tried to be shown as the victim and the victims (youngest 9, oldest 66 years old) were tried to be shown as the guilty and how the bigot administrations have been trying to protect the murderers.

According to the police records, of the 15000 people who made up the attacking crowd, only 128 were caught. The suspects have always been protected by the bigot administrations. In its first decision, Ankara 1st State Security Court convicted 26 suspects on offenses of willful homicide. These sentences were then lowered to 15 years. Then, 37 of the suspects were acquitted. And, 60 other suspects were convicted only on offenses of breaking the Law on Meetings and Demonstration Marches. The court gave this verdict by overlooking the political aspect of the incident, which actually had targeted the Republic, and, its perpetrators had attacked people whom they did not even know in person by yelling out slogans such as ‘Republic was established here in Sivas, it will be demolished here,’ ‘Secularism will go away, Sharia will come about,’ ‘Army of Muhammed is the fear of the seculars.’

Yargıtay (Court of Cassation) approved the decision on 25 of the suspects. For the others, it drew attention on their aim to target the Republic and ordered that their actions will receive penalty under the Turkish Penal Code (Article 146, sub-articles 1 and 3). The courted sentenced 38 suspects with capital punishments; 28 suspects with 7 years and 6 months, and, 14 suspects were acquitted.

On 1 May 2005, the new Turkish Penal Code came in effect. Before the law had actually changed, suspects that were convicted under article 146/3 of the code were released with the reason that this article would not have a match in the new code to be forced. The objections of the victims’ lawyers on this were denied. Then, office of the attorney general requested for the reversal of the release decision by claiming that there had been a mistake. However, it was too late because the released suspects had already vanished. No effort was made to seize the missing or released suspects. Suspect İhsan Erçakmak, who was caught by coincidence, had mentioned in a hearing that he had actually served in the military, got married, registered his child’s birth, obtained a driver’s license, and also worked officially during the time period when he was actually a ‘wanted’ suspect. Another suspect, Yılmaz Bağ, had also held a wedding in Kangal, Sivas, while he was being seeked after, according to his own plea. Although the statue of limitations was 30 years, the attorney general requested for the case of Cafer Erçakmak, one of the most significant suspects, to be abated. At that time, the abatement was blocked with the interference of the lawyers. However, meanwhile, Cafer Erçakmak had also disappeared.

Although it has been proved to the court with official documents that Cafer Erçakmak has residency in France, he was not brought from France. It was heard two years later that he had died and was buried in Sivas cemetery by his family. And, it is still unknown whether he was brought to Turkey as deceased or he was actually already in Turkey.

The recent seizing of Vahit Kaynar in Poland could be made known with the statements of joint attorneys. This suspect, who has been sentenced to life without parole, has still not been extradited. It is especially striking that German offices do not see the actions of these suspects, who killed 35 people by burning, as a violation of human rights.

It is being defended that because the law on crime against humanity has enter Turkish law in 2005, crimes that were perpetrated priorly are exempt. Lawyers who had opposed the abatement of the case under the reason unmet statute of limitations requested a more through and lawful decision. However, their request was also denied.

The court found deceased Cafer Erçakmak guilty of crime against humanity by giving his public duty as the reason, however, abated the case because he was deceased. Other suspects were given the advantage of statute of limitations. In their abatement, the court added as a ‘reason’ that ‘the suspects aside from Erçakmak were already to receive an order of release even if their case was not abated.’

There was a scandalous incident with regards to the search of lawyer and MP Sarıhan’s office. It was found out by coincidence that the address given on file for the three of the suspects who were known to be abroad was actually the address of Sarıhan’s law office. Furthermore, it was then realized that one of the judges to look over the case again, Celal Mümtaz Akıncı, was also the lawyer of the suspects previously.

Saying that they have been leading the battle for this case from two lines, one through institutional unity and one through legal efforts, Sarıhan explained: “At the forefront of both of these lines, there were always the resistance of the families of those massacred and their patience and determination for preventing other massacres. Pains will definitely be eased, if we don’t forget to be one and work together. There was a crime against humanity! Prosecutors filed a suit with regards to this crime in order to meet the demands of the subjects of the 12 September coup d’état and it was decided that there could not be abatement under statute of limitations for crimes against humanity. Therefore, the subjects of the coup of the 80’s can seek justice 32 years later. Prosecutor’s office also voided statute of limitations for torture. And, we have something beyond torture. Death! Massacre of 35 people. They were massacred by a group of 15000 people purposefully and deliberately because of their beliefs and philosophical holdings. The subjects’ purpose is not to get revenge. Families have emphasized that many times. They carry their pain with honor. They are trying to prevent such massacres from happening again in our country. They have been there at every hearing. They always stood up straight. They are under fire. But they are still struggling to prevent others from going through the same fire and to prevent our future from burning…”

Lawyers of the perpetrators are now Ministers and MPs of AKP

Many of the lawyers who defended the perpetrators of this cruel massacre have then stepped onto politics as AKP members. Some of them are: Hayati Yazıcı (Deputy Chair of AKP), Ali Bulut (member of the parliament’s commission on constitution), Bülent Tüfekçi (Provincial Chair of Malatya), Celal Mümtaz Akıncı (member of the Constitutional Court), Ferruh Aslan (İstanbul Municipality’s press office), Haydar Kemal Kurt, M. Nedim Taylan and Zeyid Aslan (MPs), and Reşat Yazak (board member of Anadolu News Agency)