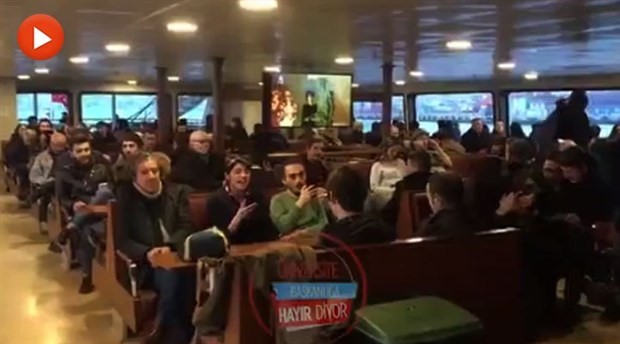 A group of young college students held a short demonstration in a public ferry in İstanbul yesterday (January 23).

Singing a song with lyrics against the upcoming referendum in Turkey for the AKP’s proposed shift to a presidential system, the students also wanted to give a message to the passengers by expressing their opposition to the ongoing controversies surrounding state of affairs in Turkey in general.

As the security guard on the ferry reported the students to police saying they ‘insulted President Erdoğan’, passengers on board reacted to the guard and insisted 'they were not bothered by the students’ acts and that it was not an insult to anyone in any ways.’

Lyrics which the security guard claimed were ‘insulting the president’ are as follows: ‘What is happening in this country? May the people of this country say ‘no’? For a prosperous country, come on and say ‘no!’’

As majority of the passengers applauded after the song, one of the students stood up and said ‘as long as the youth in this country wants to live and prosper, they (those wanting to bring about a dictatorship regime) will not be able to destroy the lives and hopes of the people.’ She also called on people to launch and give support to 'no to presidential system campaign'.

Though the security guard told people reacting to ‘mind their own business’, passengers eventually convinced the guard and the students were let free.