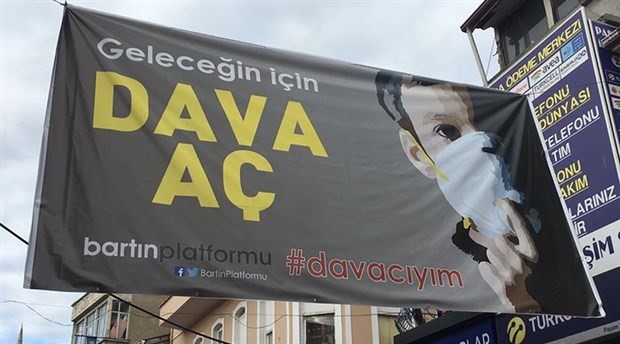 Hema Thermal Power Plant that has been in planning stage was opposed by the locals of Amasra in 2014. People in Amasra had gathered 42000 seperate letters within 10 days at that time, in order to express their opposition to the plan. As the opening date of the plants (8 November 2016) near, Amasra’s local dwellers are this time getting ready to file a lawsuit against the project, with the support of a total of 1460 complainants.

They have set up stands in front of town and city halls in Amasra and Bartın to explain to the public what exactly the approval in the EIA report means.

Citizens who want to become a complainant in the case are asked to contact the lawyers for further procedural steps. Meanwhile, an awareness campaing launched on social media under the tag of #davacıyım (I’m a complainant) has already received quite of a support.

Representatives from four parties – CHP, MHP, Saadet, Vatan – react against the approval of the project

According to the reports of Doğan News Agency (DHA), local representatives of CHP, MHP, Saadet, and Vatan gathered recently to express the objection of their parties’ and constituents in the district. Talking at the press conference held for the purpose of sharing their views and objections, CHP District Head Bora Işıkal said the following: “We have held press conferences and expressed out stand on this many times before… Tradesmen of Amasra have said ‘we claim our right on our labor and our future’ and closed up their shops to protest. Fishermen and travel boats gathered to send their message across. They all said, ‘we are the one who have the say in our town’… The people of Bartın who do not want to lose their natural water resources and their health voiced their rejection of the ‘thermal power plant’ with 42000 letters. And, the local assembly of Amasra made a decision in rejection of the project in two consecutive terms. 35 villages, along with Amasra’s central and district authorities, have said ‘no to the power plant’... All forces – civil and publi - in this struggle have gathered under the Bartın Platform... We are on the same ground in regards to our determination to prevent this power plant from being put in operation... In reference to the year of 1460, when Fatih Sultan Mehmed conqured Amasra, we are going to file a lawsuit against this project with at least 1460 complainants...”

One of the most prominent touristic sites of the Black Sea Region, Amasra is a unique port town in the province of Bartın. With a population of nearly 7000, Amasra is also appreciated widely for its historical significance as a town with ancient ruins and draws domestic and foreign tourists regularly with its two close to land islands and beautiful beaches located at its bays.