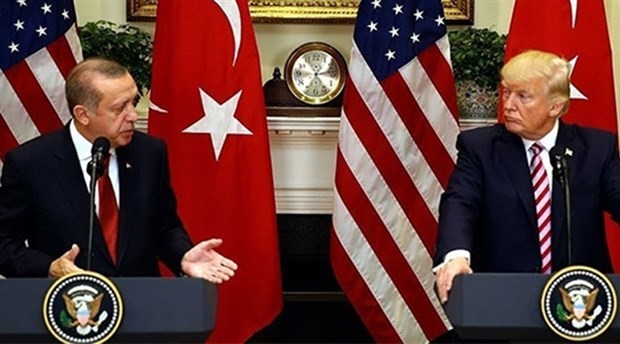 Turkish President Tayyip Erdoğan told U.S. President Donald Trump on Tuesday his country would not accept Syrian Kurdish fighters in the region but stopped short of directly criticizing a U.S. decision to arm them.

At a White House meeting, Trump lauded Erdoğan as an important ally in the "fight against terrorism" and did not mention Erdoğan's domestic crackdown after last year's failed coup attempt.

"We've had a great relationship and we will make it even better," Trump said in their joint appearance.

Erdoğan said his visit would "mark a historical turn of tide" and hailed "outstanding relations" between the nations.

It was an especially positive tone considering the tensions over Washington's decision to arm the Syrian Kurdish YPG militia that Ankara regards as an extension of the outlawed Kurdistan Workers Party (PKK).

Fighting erupted among protesters outside the Turkish ambassador's residence, resulting in multiple injuries and two arrests - one for aggravated assault and one for assault on a police officer, a city police spokesman said.

The spokesman, officer Hugh Carew, said the origin of the melee was still under investigation. A local NBC television affiliate reported Erdoğan was inside the building at the time.

The city fire department reported nine wounded were taken to a local hospital.

U.S. officials on May 9 disclosed Trump's approval of plans to supply the YPG as it advances toward the Islamic State stronghold of Raqqa in Syria.

Erdoğan had pledged to use the White House meeting to try to get Trump to change course on the YPG. Ankara regards the YPG as an extension of the PKK, which has fought an insurgency in southeastern Turkey since 1984 and is considered a terrorist group by the United States, Turkey and Europe.

"We support Turkey in the ... fight against terror and terror groups like ISIS and the PKK, and ensure they have no safe quarter, the terror groups," Trump said, using an acronym for Islamic State. "We also appreciate Turkey's leadership in seeking an end to the horrific killing in Syria."

The YPG, or People's Protection Units, effectively serves as the military of the autonomous Kurdish-led regions that emerged in northern Syria with the retreat of state authority in 2011 that accompanied the outbreak of civil war.

The United States sees the YPG as distinct from the PKK and as a valuable partner in the fight against Islamic State.
The administration of Trump's predecessor, Barack Obama, had criticized Erdoğan's crackdown on the Turkish press and academia after the failed coup in July 2016. Tens of thousands of Turkish citizens have since been detained and some Erdoğan supporters sought to blame the United States for the coup attempt.

On Tuesday, Trump made no mention of Erdoğan's record on dissent and free speech.

Erdogan's visit was further complicated by Turkey's calls for the United States to extradite Turkish cleric Fethullah Gülen, who has lived in self-imposed exile in Pennsylvania. Erdoğan blames Gülen supporters for the attempted coup. Gülen has denied involvement.

Erdoğan's spokesman, Ibrahim Kalın, said in a statement the two leaders discussed "possible steps against FETO," referring to what Ankara calls the "Gülenist Terror Organization," a term it uses to describe Gülen's network. Kalın did not specify exactly what steps they discussed.