Turkey votes in presidential and parliamentary polls that will complete transition to new executive presidential system. There is news of election safety violations committed in Turkey’s southeastern province of Urfa, where four people were killed in an armed conflict during the election works 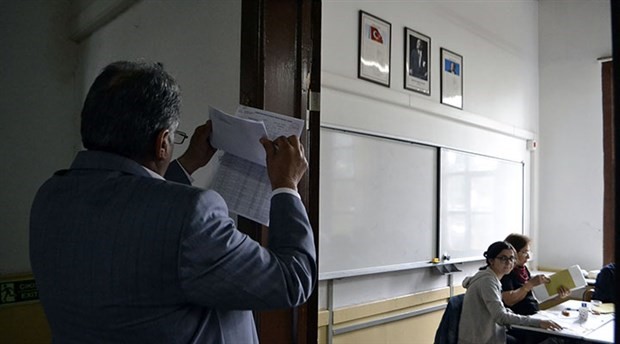 The ballot boxes have been opened for the Presidential and Parliamentary elections. The voters can cast their votes until 5 p.m. today (June 24).

56 million 322 thousand 632 voters living in Turkey will cast their votes at 180 thousand and 65 ballot boxes across Turkey.

The voting procedure for the citizens of Turkey living abroad started on June 7 and continued until June 19. The ones who are registered as overseas voters can cast their votes at the customs gates until 5 p.m. today.

Across Turkey, the voters can vote between 8 a.m. and 5 p.m. However, in case there are still voters waiting to cast their votes at the ballot boxes, they can vote after the presiding officer counts the number of the waiting voters.

With the start of the voting process for the Presidential and Parliamentary elections, allegations of election safety violations have also started to come from different parts of Turkey.

The Balıkesir MP of the main opposition party Republican People's Party (CHP) Ahmet Akın has posted a tweet about a group of people in Erzurum who are carrying cards, which have been alleged distributed by the Ministry of Interior and read, "Election Officer - Full Access".

There are also other posts on social media, showing the people carrying the above-mentioned cards.

The AKP-member mayor: "Votes will be cast for the ones who are not here as well"

The Mardin MP candidate of the HDP Dilaver İnal has stated that the mayor of the district of Yeşilli in Mardin Hayrettin Demir threatened the polling clerks by saying, "Votes will be cast for the ones who are not here as well. I call all the shots here. Are you teaching new tricks to an old dog?"

Mezopotamya Agency has reported that the mayor Demir also threatened the HDP MP candidate Dilaver İnal, who went to a secondary school in the district center to interfere in the situation.

In the district of Kulp in Turkey's southeastern province of Diyarbakır, the village guards prevented the polling clerks of the HDP from entering the village of Koçkar for a long time.

The clerks of the party could enter the village after negotiating with the Chair of District Election Council and District Gendarmerie Command.

It has been reported that in the district of Merkez Efendi in Denizli, the election bags kept at a high school to be sent to 12 other schools were ripped and the packages of the voting envelops and papers were damaged.

The CHP and HDP informed the attorneys about the incident and appealed to the Supreme Election Council.

An armed conflict erupted during the election works of the Justice and Development Party (AKP) Urfa MP and MP candidate İbrahim Halil Yıldız in the district of Suruç in Turkey's southeastern province of Urfa on June 14. Esvet Şenyaşar and his two sons, Celal and Adil Şenyaşar as well as the AKP MP Yıldız's brother Mehmet Şah Yıldız were killed in the conflict.

It has been reported that the AKP MP İbrahim Halil Yıldız visited the schools in Suruç in company with a large number of armed guards, battered the polling clerks of the Peoples' Democratic Party (HDP) and forced the voters to vote for the AKP and the President and AKP Chair Recep Tayyip Erdoğan.

As reported by Mezopotamya Agency, the AKP MP Yıldız and those accompanying him seized the mobile phones of all voters at three schools that they had visited so far.

The Ankara MP of the main opposition party Republican Peoples' Party (CHP) Murat Emir has stated that they have appealed to the Supreme Election Council (YSK) regarding the repressions and election safety violations committed in Urfa.

YSK has launched an investigation

Speaking about the reported incidents in Suruç, the Chairperson of the YSK Sadi Güven has said, "The necessary administrative and legal steps have been taken regarding the election safety related allegations about some ballot boxes in Suruç".

It has also been reported that the CHP has made four separate applications to the Supreme Election Council about the incidents in Urfa. The party has made 10 applications in total to the Council so far.

"Everyone should keep a watchful eye on Urfa. We are waging a serious struggle. We will succeed."

"Almost 30 of our observers in Şanlıurfa have been forcefully moved away from the ballot boxes. A bitter struggle is continuing. No matter what happens, the national will will win!"

Some election safety violations reported from Urfa are as follows:

At the ballot box no. 2044 in the village of Eyyübiye Bulduk, women voters have been prevented from casting their votes.

At the ballot box no. 1196 in the village of Geçit, men have casted votes in place of women.

At the ballot box no. 2110 in the village of Kanatlı, the village mukhtar has prevented women from voting by stating, "We have casted votes for you". (HK/SD)

As part of the electoral prohibitions, all media outlets are forbidden to publish or broadcast news, forecasts or commentaries regarding the election and its results until 6 p.m. However, the Supreme Election Council (YSK) is authorized to lift the related prohibition at an earlier time.

The sale of alcohol is also prohibited between 6 a.m. and 12 a.m. On this day, it is forbidden for everyone to carry weapons, except for the officers responsible for ensuring public security and order.

During the voting process, the public places of entertainment such as coffeehouses and internet cafes will also remain closed. While restaurants are only allowed to serve meals, wedding ceremonies without a service of alcoholic beverages can also be held after 6 p.m.