Turkey: US indictment of former minister is 'repetition of coup attempt' 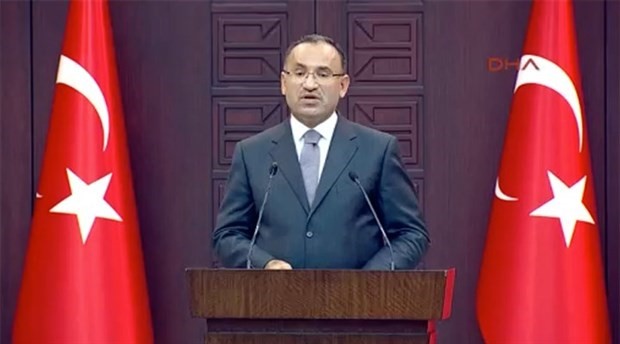 ANKARA - Turkey said on Monday its former economy minister, indicted in the United States for conspiring to violate U.S. sanctions on Iran, acted within international law and that charges against him amounted to a coup attempt through American courts.

Former minister Zafer Çağlayan “has protected Turkey’s interests as Turkish economy minister, and has acted within the laws of our country and international laws while doing that,” government spokesman Bekir Bozdağ said.

The charges against Çağlayan were “a repetition of the December FETO coup attempt ... through the American judiciary”, Bozdağ said, referring to 2013 leaks about alleged government corruption which were blamed on President Tayyip Erdoğan’s opponents.

Caglayan and the ex-head of a state-owned Turkish bank were charged on Wednesday with conspiring to violate U.S. sanctions on Iran by illegally moving hundreds of millions of dollars through the U.S. financial system on Tehran’s behalf.

The charges stem from the case against Reza Zarrab, a wealthy Turkish-Iranian gold trader who was arrested in the United States over sanctions evasion last year. He has pleaded not guilty.

Wednesday’s indictment marked the first time an ex-government member with close ties to Erdoğan had been charged in the investigation that has strained ties between Washington and Ankara.

Erdoğan said last week he had told Washington that Turkey had never agreed to comply with its sanctions on Iran, and called on the United States to review the indictment.

Turkey’s presidency said on Saturday Erdoğan spoke by phone with U.S. President Donald Trump. It did not say whether the two leaders discussed the case.

Bozdağ also condemned the indictment of Erdoğan’s guards over violence during his visit to Washington in June, saying it relied on testimony from supporters of the outlawed militant PKK group, and had done “great damage” to U.S.-Turkish ties.