Known for his open support for Turkey’s ruling Justice and Development Party (AKP), the columnist from Turkey’s right-wing Akit newspaper, Abdurrahman Dilipak, claimed in his recent article that ‘Vatican employs the demons it evicts and uses them in intelligence services’. 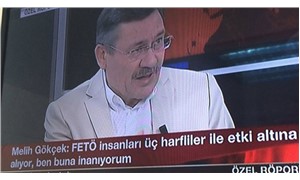 Ankara Mayor Gökçek: ‘Gülen has jinns; he controls people with them’

Titling his piece as ‘Exorcism and Demonism’, Dilipak asserted that ‘exorcism and demonism are two scientific branches studied as part of the theological studies of Catholicism’, and said ‘relevant regulations and rules are abided by Vatican and by all Catholic churches in their diplomatic missions’.

“Yes, yes, exorcism takes place in churches! And, the evicted jinns are judged, punished, jailed, or taken under the command of the church. Meaning, they make an agreement (with the jinns) and hire them! It is also said that they use them in intelligence services or in haunting others”.

Comparing it with the FETÖ (Fethullahist Terrorist Organization) – the alleged group behind the coup plot of last summer -, Dilipak said ‘it is also thought that members of FETÖ are also working hard in similar practices’.