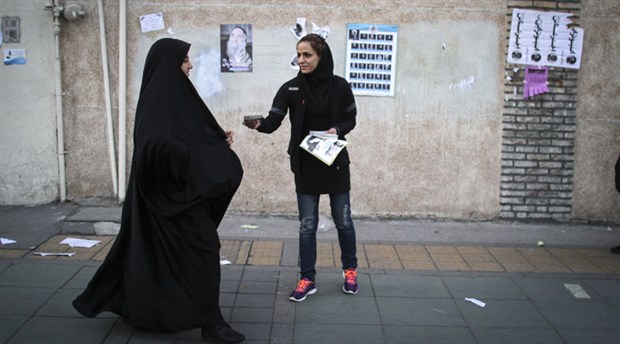 Negar S. who was a feminist journalist in Iran, had to quit her job and leave the country because of the government pressure and censor. She found a way to move in Turkey. Birgün Daily spoke to Negar S. about being a feminist journalist and how women are taking places in the long-standing protests in Iran.

1. How do you feel about being a feminist journalist in Iran?

It's hard to say; as a patriarchal society work in editorial office is difficult. There are many sexual behaviours in offices and other reporters and journalist usually use sexual swears and words and jokes during their talk. It's part of your situation in your work. You must accept these things. On the other hand, usually editorial don't let you go to critics' places and areas, because you are females. And also, I should add, there are many taboos to publish articles about women and their problems; for example, about their period time and use tampons, or their diseases.

2. How has the #WhiteWednesdays protests started? What do women think of it? Are they joining to the protests or standing against it?

First of all, you should know that resistance has a long story and it's started before 1905 (Mashrutiyyat = The Persian Constitutional Revolution) and it’s continued till here. You should be aware about "one million signatures" campaign. There were many resistances during history, and nowadays Masih Alinejad, started a campaign that asked women to remove the hijab and record a video of this and publish it in social media. And it's work.

I should emphasize that; this movement is not the most important issue of Iranian Women. And also, the Influence of this movement is not powerful. It's just between rich and middle social classes. If you follow the videos that she published them, you will understand it that none of these videos came from women in deprived areas.

Many women that follow this movement and published their videos, and it's become famous. But I should add this there are different opinions about Masih Alinejad, some people accepted this and joined her and some others didn't say anything, and keep silent about her. Anyway, this is an action and help people especially women gathering by this name "White Wednesdays". The last group, is that women who supported the regime and they’re completely against her. There is also some pessimism about Masih Alinejad between Iranian women activists about her, because she earns money by this way and she has a big budget from other countries especially USA and these activists believes that it's against their desires.

3. What is the biggest issue of the women live in Iran?

I know there are a lot of problems and restrictive policy. As I said, this biggest problem in Iran is patriarch society. Islamic regime ratifies Islamic rules in parliaments and these rules are completely came from Islam and Sharia.

Basically, The issue of livelihood effect on women's lives, it’s forced women to find some ways to solve this problem, and also it caused to got married at a young age.

the second one is rouls, it means when women got married have no rights. Marriage law and equal rights, fewer salary than men and other rights makes women inferior to men.

All of these problems comes from Iran's law is jurisprudential and patriotic and not civil.

4. How are women taking places in the long-stand protests in Iran?

Nowadays, Iranian women are leaders of protests in the streets. they want to show their power and it’s sign of Identity-seeking. The female seeks out her own identity and status. They show this is me, you can follow me but I want to change this situation. I want to break the chains.

For example, there was a woman as a protest in the street, she picked up the Tear gas and throw it to the police; the body of tear gas is very hot and it’s hurt the hand but she done it without any fear. All of this things shown that they accepted her roles in the street as an equal human and wants her rights. Equal rights, identity and leadership.