Anasayfa BİRGÜN DAİLY Who is the new Interior Minister Süleyman Soylu and what had he said about AKP in the past?
BİRGÜN DAİLY 01.09.2016 16:28

Who is the new Interior Minister Süleyman Soylu and what had he said about AKP in the past?

Süleyman Soylu has been appointed as the new Interior Minister after Efkan Ala’s resignation yesterday (August 31).

After talking to President Tayyip Erdoğan in Beştepe, Ankara, Prime Minister Binali Yıldırım has announced that Süleyman Soylu, former Minister of Labor and Social Security, has been appointed to the Interior Ministry after the resignation of Minister Efkan Ala.

Who is Süleyman Soylu?

Born and raised in İstanbul, Soylu graduated from İstanbul University’s School of Business Administration. After starting his career in 1990 at broker firms in İstanbul stock exchange, Soylu then founded his own firm in 1995 and has continued his political and business life along that line since then.

Having entered politics of Turkey in 1987 as the first time, he took role in youth branches of the central right Doğru Yol Partisi (True Path Party). In 1995, at the age of 25, Soylu had become the head of the district organization for Gaziosmanpaşa, İstanbul for his party, also receiving the title of the youngest district head in Turkey. In 1999, he took over the post of İstanbul Provincial Head and continued holding this position until 2002, when he became a candidate in national elections.

While Soylu had been one of the favorites of then DYP Chair and İstanbul MP Tansu Çiller as a young member of the party, he was later selected as the Chair for Democrat Party in 2007, when DYP and ANAP parties tried uniting. In 2008, he was again elected by his party as the Chair with by gaining 922 votes out of 993.

Prior to the local elections of 2009, Soylu had asserted that ‘if his party could not receive more votes than the previous elections, he was going to resign’, however, he had maintained his position, due to insistence of party members, even though his party got less votes. Then, he eventually withdrew from his position in 2009; and, he mostly continued his career by attending conferences and seminars of universities and civil society institutions at various parts of Turkey.

In 2010, Soylu saw the September 12 Referendum for constitutional amendment as a critical point for Turkey’s transformation and democratization and launched a series of lectures under the title of ‘Democracy Gatherings’. During these seminars, Soylu went all around Turkey with his friends to express why giving a ‘yes’ vote on this Referendum was so crucial. As Hüsamettin Cindoruk was elected as the Chair of DP at that time, Soylu was dismissed from his party after these seminars and activities.

What Soylu had said about AKP during his times at DP

Although Süleyman Soylu had called AKP all names in the book when he was the Chair of DP, he then joined AKP and became an MP. And, now, he is the Interior Minister.

Some of the statements of Soylu about AKP while he was in DP are as the following:

“This country has such a Prime Minister that he comes up against everyone and creates chaos; and, when he goes to his house in the evening, he does not put himself in the shoes of the tradesmen and the farmers that he leaves destitute in front of their spouses and children. How can he look in the face of his own family? Unemployment was 6 percent before AKP; now, it rose to 11.3 percent. Just as the Prime Minister could not manage to ride a horse, he also could not manage to run this country.” (20 April 2008)

‘They are swamped with poverty!’

“At March 29 local elections, the people will pull out the yellow card to AKP government; and, DP will pull out a red card against it. AKP has made even holidays unbearable for this nation with its wrong economic policies. Our people have forgotten to laugh. With their ineptness and inefficiencies, they have left Turkey in crisis. They are swamped with poverty! In Turkey, provincial activities are carried out with tenders and favoritism.” (10 December 2008)

“You turn it, it’s empty. You turn it again, you get a ‘pass’. For days, the pain of our Muslim brothers in Palestine has given us grief. But you have talks with Olmert; and, then, the next day, these massacres take place. If Kırat (Democrat Party) had been in power, those carrying out these massacres would have no place on this earth. You (Erdoğan) first came up and said ‘I am a negotiator’; now, you are given the duty of hitting into the hearts of the Muslim countries. You, Recep Tayyip Erdoğan! You have given in, you have become an aide, and you have disappointed the nation. Your true colors have been revealed!” (31 December 2008)

‘The PM has brought the king of rents!’

“The government that said ‘I will fight against corruption’ has drowned Turkey in the well of corruption. They said they were not going to let any unfairness to take place against the youth. But they do politics over the youth every day. He (Erdoğan) said he was not going to turn this country into a ‘land for rent’ but Mr. Prime Minister has brought the king of rents! These people are half doctors; half masters.” (25 February 2009)

‘He sees himself as the Sultan’

“Certain obvious things are taking place in Turkey during the election process. AKP members, for a while, have been trying to see the Chair and the Prime Minister as the Sultan; the PM himself also wants to see himself like a Sultan. Our country has a culture of alms giving. One in every three people in Turkey is below the poverty line. But the ones who should be criticized about this situation are the officials of the government who caused these people to become like this. (14 March 2009)

And, what Soylu said after joining AKP

During the eve of the June 7 elections of last year, Süleyman Soylu had said “God is my witness that I am not going to leave Erdoğan even if my whole body is in blood bath’ and won the trophy from AKP.

Having been invited to join AKP by Recep Tayyip Erdoğan himself as the Prime Minister, Süleyman Soylu officially became a member of AKP on 5 September 2012. On 30 September 2012, he was then assigned the post of Deputy Chair for AKP. In the 64th government of the Turkish Republic, Soylu served as the Minister of Labor and Social Security. 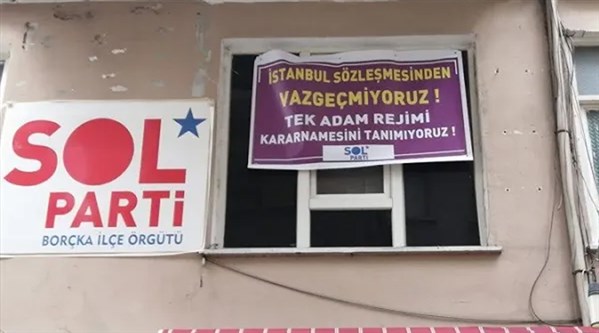