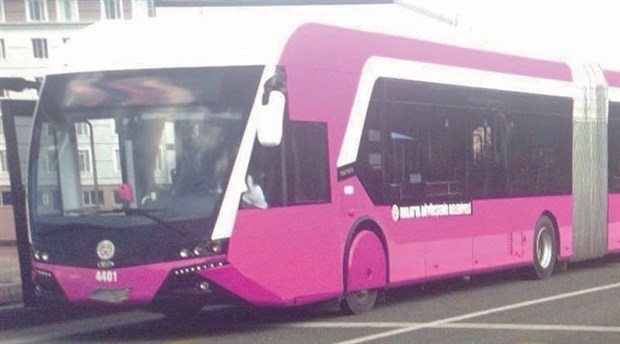 After the ‘pink wagons’ for women in Turkey’s Bursa province, a similar regulation has been put in force in the central Anatolian province of Malatya with ‘pink trambus’.

A practice initially suggested in 2012 by the women’s branch of the conservative Islamist party Saadet (Felicity) Party, the women-only regulations in public transportation was first brought to reality in 2015 in the southeastern province of Urfa.

While a similar step was tried to be taken in the central Anatolian province of Sivas recently with ‘pink taxis’, a large group of women refused to use it by saying ‘the aggressive men must learn to be human’.

As Malatya’s municipality run by the ruling Justice and Development Party (AKP) has announced that two ‘pink tram-buses’ will be in service starting next month, politicians from the opposition and women expressed their objection to it.

In their social media messages, women demanded ‘men to control themselves rather than trying to separate women’.

‘Eliminate the harasser and the rapist, not the women’, the women said and stated that ‘the problem regarding the increased violence against women cannot be solved through isolating the women from the society and separating men and women’.

Giving statements about it, MP from the main opposition CHP and the member of parliamentary committee on Equality Between Men and Women, Candan Yüceer, said this latest regulation cannot be analyzed separately from the policies of 15 year long AKP administration, adding, “Women are being pushed out of the public sphere step by step. The purpose here is not to protect the women; it is unfortunately to create an unhealthy society where men and women are separated… Will the next step be to tell women ‘not to go out and stay at home as it is safer’? Steps that isolate women and erode their rights are being taken gradually!”

Lawyer Selin Nakıpoğlu also commented on it, saying the women are once again put into a situation where ‘they do not make decisions on issues directly regarding them’. “Have you checked the experiences of the countries from which you have adapted this discriminative regulation? Have you read the studies which suggest that the more women and men are separated the more there happen to be cases of violence, harassment, and rape?”, lawyer Nakıpoğlu said.