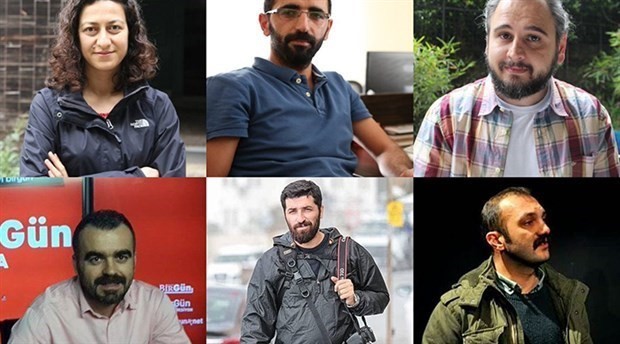 6 journalists and media professionals who were taken into custody on December 25th were brought before a court in İstanbul yesterday (January 17).

Mahir Kanaat from BirGün; Tunca Öğreten from Diken; Derya Okatan from ETHA; Ömer Çelik and Metin Yoksu from DİHA; and, Eray Saygın from Yolculuk had been kept in custody for over three weeks before being tried over ‘terror-related charges.’

Accusations against all 6 media professionals under the case filed with the name ‘RedHack perception team’ are based on their membership in ‘an open to public twitter group’ related to hacker group RedHack, which had released e-mail messages claimed to be belonging to Turkey’s energy minister Berat Albayrak. They all denied the accusations and noted they had been added to the group by its admin and followed it since its posts were newsworthy. Referred documents are still accessible over the internet at certain sites.

While each professional was accused of being a member or doing propaganda of a ‘different terrorist organization’ (FETÖ/PYD, MLKP, DHKP-C, YGD), BirGün team member Mahir Kanaat was charged with FETÖ/PYD, a group led by exiled cleric Fethullah Gülen who is alleged to be behind the coup attempt in Turkey last year.

Kanaat’s lawyer Atilla Bahçıvan said since filing of the case was initially in reference to decrees passed under state of emergency and in connection to FETÖ, ‘officials must have chosen a person to accuse of FETÖ ties just to avoid revealing the unlawful practice behind the detentions.’

In his testimony, Kanaat said: “I am a member of ÖDP (Freedom and Solidarity Party). I have no ties whatsoever with the Cemaat (Gülen community). Neither I nor my family has ever had relations with the Cemaat. I do not accept the charges...”