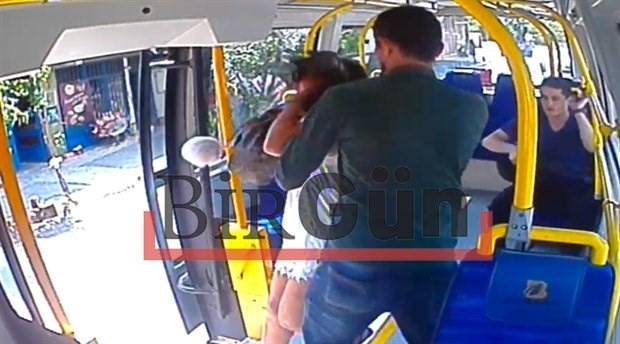 Earlier last week, a young woman in İstanbul was attacked by an aggressor in public transportation for wearing shorts.
The mother of the attacked woman, Melisa Sağlam, told BirGün reporter Mustafa Kömüş that her 21 year old daughter was traumatized by the incident and could not get on public transportation since the attack, which took place on June 14th, Wednesday in Pendik district of İstanbul’s Anatolian side.

Following the complaint of Melisa Sağlam, police examined the videos recorded by the security cameras in the vehicle and caught the suspect on Saturday (June 17).

As the suspect was released the same day that he was caught, Sağlam’s family and friends, as well as, the public in general, reacted to the release of the aggressor.

Women’s activist group Nar Solidarity Platform of Women and Sağlam’s lawyer gave a press statement in front of the Kartal Courthouse in İstanbul on Tuesday (June 20).

Talking to Güzin Çamur of BirGün, young woman Melisa Sağlam said ‘she wishes for the attacker to get punished’ and added: “Attacks against women are either permitted or punished too lightly. And, others (with same intentions) get encouraged by it… These kinds of people get praised (by some)… And, they get their power from the society and from lack of justice. Our society must already react to this!”

Mentioning how the driver of the minibus watched the attack take place and how another man even told her to ‘stop crying in the car’, Sağlam called on people to get together against this growing violence against women in the country.

When the police reached the driver to get the video recordings, Sağlam also met with the driver and asked him: ‘Didn’t you feel sorry at all?’ ‘I don’t have to protect you’, the driver replied.

Sağlam’s mother also called on the public to give attention to this problem and asked all mothers to ‘always stand by their children who face these kinds of assaults and attacks.’

On the other hand, the suspect Ercan Kızılateş said in his testimony that ‘he was turned on by the way she was dressed’.
Suspect Kızılateş told the incident in his testimony with following statements: “I warned the woman in shorts because her clothes were too revealing and I was fasting (for Ramadan). I said to her: ‘My friend, there is something called manners and morals. Getting on a public transportation like this is not proper’. So, in response to this, the woman told me ‘not to look, then’…I told her that sometimes people cannot control their desires and told her that her way of dressing turned me on. She huffed... and began to talk to someone on her phone about me... I got angry with her words about me and told her to stop talking about me to the other person on the phone... and, I pushed her face with the back of my hand slowly before getting out of the car...”

As the video of the attack released by BirGün on Wednesday (June 21) revealed the details of the attack and media coverage of the report and public reaction grew in response, the authorities have issued a warrant of arrest against the suspect, who had also ‘complained’ about the young woman in her testimony.