According to recorded data in Turkey, there are currently 1.5 million drug addicts in the country; and, one third of them are bonzai users. Moreover, deaths related to bonzai abuse are increasing day by day just as the number of young people in Turkey using it. 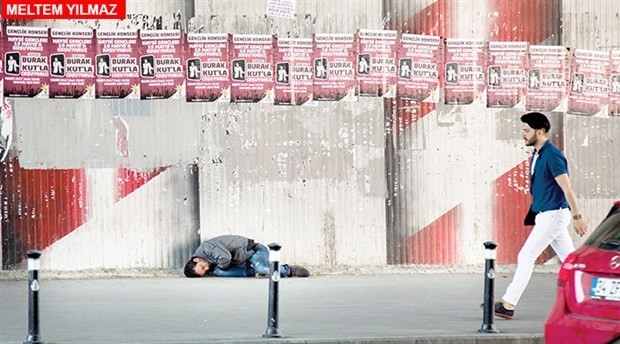 Children and young adults in Turkey who fall down to the ground in back streets, under bridges, and behind bus stops; and, who get stuck between life and death… Most of them are not even 18 yet but their life experiences are heavy.

Just yesterday (May 29), the heart-rending situation of young people fainting in the middle of streets of İstanbul’s busy town center Mecidiyeköy due to bonzai usage was reflected on cameras. But they are neither the first nor the last: there are currently 1.5 million drug addicts in the country; and, one third of them are bonzai users. Moreover, deaths related to bonzai abuse are increasing day by day just as the number of young people in Turkey using it.

It would be difficult to expect it to be otherwise since drug dealers today openly offer drugs to young people passing by at İstanbul’s heart, İstiklal Street. As BirGün, we have tried to bring up this issue – which has now become one of the major problems in Turkey – in more detail.

The synthetic drug that is called ‘bonzai’ in Turkey was created as a ‘synthetic substance that would have effects resembling those caused by marijuana.’ The substance which was first sold online in 2002 was then found out to be on shelves in supermarkets in Europe, at sex shops, at gas stations, etc. However, when prohibition of this substance in these countries began in 2008, the substance itself had not even been discovered in Turkey at that time yet.

Bonzai made it to police reports for the first time in Turkey back in 2010. Around that time, the number of users grew enormously. In fact, the substance was being sold at that time by online stores centered in Turkey. Internet sites that were created under the so-called names of ‘natural herbal aromatic blends and plant manure’ used to deliver bonzai to people’s houses within 3-7 days after the order. Some of the young people whose cause of death was recorded at that time as ‘heart attack’ were actually the first victims of bonzai in Turkey.

There are several reasons for usage of bonzai to elevate severely. Firstly, it is extremely easy to get (in Turkey). Today in Turkey, it is quite difficult to find a place that sells alcoholic beverages after 22:00 since the current law bans sale of alcoholic drinks at stores after that hour. However, when one wants to get bonzai, it is enough to just take a short walk at certain streets.

Another reason for the substance to be this common in Turkey is that it is cheap. Though it costs almost the same as heroin, bonzai is preferred most often since a small dosage of it leaves the user under influence for a long time.

A third reason for the bonzai epidemic in the country is that it is not noticeable when the user uses it. Since people mostly use it by placing just a few bit of it to the tip of cigarettes, they are able to smoke it easily wherever they are.

A result of urban transformation projects

One might think that only people from poor towns of Turkey ‘get high’ with this drug, however, it is not so. The profile of bonzai users in Turkey ranges from women working in major business centers to college students, as well as, victims of urban transformation projects in Turkey and the abusers of heroin.

Bonzai has now become a substance in Turkey that the dealers get the most profit from: spending a manufacturing cost in the amount of 10 TL results in earning around 10K TL…

Front-page article of BirGün published on 30 May 2017, Tuesday with the headline of 'Our youth is dying blatantly'