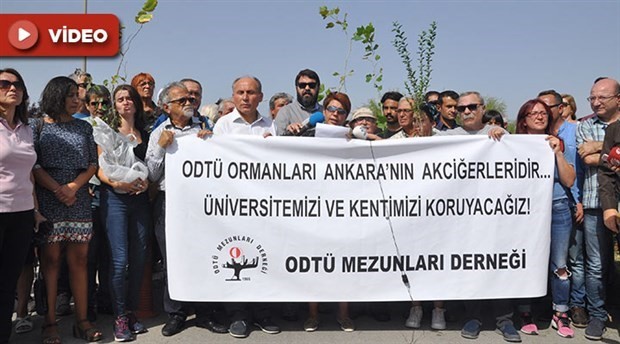 Members of METU Alumni Association, students, and a group of lawmakers protested the project launched for construction of a road and a tunnel that will pass through the forested lands of the campus of one of Turkey’s most accredited universities.

The project had sparked reactions when it was initially proposed as it suggested part of the green area of the campus to be destroyed.

The rector’s office of METU, which had also objected to the project previously, has recently agreed to sign it.

The protesters gathered in front of the campus and demanded the rector to resign.

Almost immediately after the protocol was signed between the rector’s office and the office of Ankara’s mayor, construction vehicles were brought to the site to start the process. Water cannon vehicles and riot police teams were placed on duty on the construction site in case protests sparked.

Ankara’s mayor Melih Gökçek announced the start of the construction of 4.5 km long road from his personal Twitter account by defining the prompt start as a ‘record’.