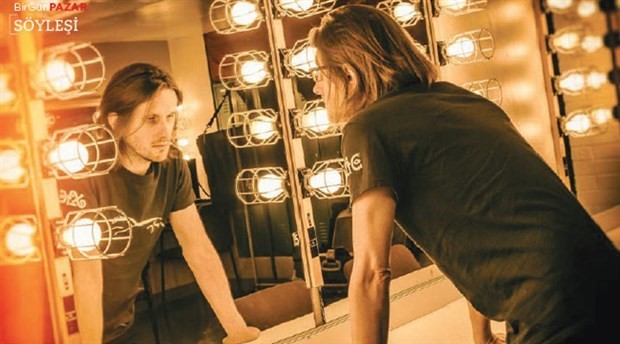 And if you ask me again/ Is this life? /I don't see I have a choice/ But I still smile says Steven Wilson in gis song about refugees. Wilson is a musician who is aware of what's going on around the world. He knows to see good things besides her pessimism. Underlining that the "alienation" created by technology in humans is also reflected in the music world. Wilson expresses inspiration even from surrealist cinema. The tickets for the concert in Zorlu PSM on July 22 are about to run out. We talked with Steven Wilson, who wrote the name of the present and all progressive rock history, before the Istanbul concert.

When we look at your past, we see a very successful music career. If you could define your own music, what are the things that separate your music from the main stream music?

Well, I like the idea of music as a journey. So I am kind of interested in storytelling and I am interested in the idea of an album rather than just a group of songs. I like the idea that it seems like you have been taken on some kind of journey and there is a flow and a storytelling aspect. What that means, I hope people who listen to my music will sit down and listen to the album from the beginning to the end which is quite demanding thing in this particular time we live in. Because I think people are more used to listening to playlists, short bursts of music, individual songs rather than the whole album.

You had a concert in İstanbul in 2016. You will be here again in the following days. How was the concert from you point? How do you feel about your audience in Turkey?

It was wonderful. It is the first time I have ever been to Turkey even as a tourist never been there before. So it was a real lovely experience. First I spent a day off there looking around the city. And the secondly met fans which was thrilling. When you go to a country for the first time and you meet people that have been listening to you music. In some cases for 10- 15 or in my case even 20 years they have been waiting all this time for you to come. So there is always a kind of electricity in the air when you play in country or city for the first time. So my experience in İstanbul was really wonderful atmosphere. And I wanted to come back as soon as possible which is I will be there in couple of weeks to play again.

Is the set list ready? Will you only play your own music or will you also play Porcupine Tree?

The song “To The Bone” ,n your last album, starts with “There is no single truth, is there any, because all of us are different”. Also, you have a song about refugees. Can we say that there are criticisms for today’s society in this album? Are you hopeful for the future?

I think it is hard to look around the world we live in and be fantasticly positive, fantasticly optimistic. There is a lot to be concerned about, angry about or melancholic about the world. I am not different to any other songwriter who thinks about the world they live in and wants to reflect that world. And I see the last 2-3 years have been particularly depressing things going on like politically, socially. And also lots of my music reflects not just politics but also society in general. Human species is evolving and we are evolving in a way to me not necessarily. But there are also some good things for example vegetarianism is on the rise. More and more people are stopping eating and starting care about animals. That’s fantastic. That’s a really positive thing. But a very negative thing would be people too distracted by the internet by their phones. It is much harder now someone like me who does care about telling stories. It is much harder now for me to get the attention of people who tries to listen more than 2 minutes without checking emails or phones. And I think that something is happening right the way through society. Doesn’t only affect in music, it affects everything. We have this incredible planet that we share with other species. I think sometimes we don’t appreciate. We are too distracted by the technology. It leads the distortion of truth. There are a lot of people making a lot of noise. And people are less tolerant to each other. I could talk about this for a long time and I do talk about this things in the songs you are absolutely right. The question is where the human rise is heading?

When you talked about the technology, I directly think about Black Mirror. Did you watch Black Mirror?

I love Black Mirror. I am a big fan of Black Mirror. I love dystopian science-fi. Looks at the future and the present as a very distort place. Think about the original movie Blade Runner which presents a very dark negative view of future society. And I love things like Black Mirror because it is almost too true. It is almost like we are living. Some of its episodes were like that’s now that’s happening. I am a big Charlie Brooker fan. I think he is one of the greatest thinkers.

So what are the other art branches that inspire you other than music? For example what about cinema?

I grow up very much experiencing music and cinema together. I love them both equally. I was fascinated by lots of European cinema, Surrealist cinema. Directors like David Lynch or Stanley Kubrick. And still to this day I am very much a fan of cinema. I love the movies that have science fiction element, but they are also much grounded in reality in the world that we live in. There is also a British film called “Under the skin” had Scarlett Johansson in it made by British director Jonathan Glazer. I absolutely adored that film. And I just show movie couple of weeks ago called “Annihilation” with Natalie Portman and I absolutely loved it. I love the films that have poetry. They are very dark and have a melancholic poetry into them.

Before your last album, we see more melancholic and more classical progressive rock songs. However, by the “To the bone” album, the effects of 90’s pop music are seemed. Is it consciously a new line of your music or just for this album?

I don’t consciously make any kind of music except I make Steven Wilson music. My musical listening has risen from the really early age that compassed everything from very serious conceptual rock music to the pop like ABBA and the Bee Gees. I grow up in a house where my mum listened to those kinds of great pop artists. And when I was a teenager at 80s my hero was Prince. Because he was the musical genius of the 80s, the way Beatles had been in the 60s. He was pushing the experimental pop music. I grow up also by listening Depeche Mode, Tears For Fears, Talk Talk, Kate Bush… And all of these artists are you would call pop. They make pop music. They make very intellectual pop music and very sophisticated pop music. But nevertheless, it is pop. And I have never been thought pop as a negative thing actually it is very positive thing. Pop meaning just the music that you want to be popular or accessible to a wider audience. So I am not necessarily conscious of making any kind of music. But I think I was aware of that in the “To the bone” had more focus on that side of my work and perhaps it was less focus on conceptual rock element this time. I don’t know whether it is going to continue like this to the next album. I can’t tell you since I didn’t plan those things. I see what comes when I sit to write.

Yes. I think that’s another thing that relates to the era of internet. Because before the internet, I don’t think we really knew anything about the musicians. I didn’t know anything about the private life of Prince. I didn’t know about the private life of the most of the musicians that I listen to. When we enter the age of internet and social media like Facebook and Instagram, now we have a generation of pop and rock musicians that not all of them but some of them basically put every tiny detail of their life upon the internet. To me personally, I don’t like that because I think the power and the magic of music is to do with mystery and some sense of enigma. I think people like Prince absolutely understood that. Band like Pink Floyd or Radiohead, these all understood the power of being not necessarily in the public eye; keeping the enigma about what you are doing and letting the audience to imagine. What kind of person you are, what your life is like. So I am someone who feels that. I want to keep my private life private because it is not relevant.