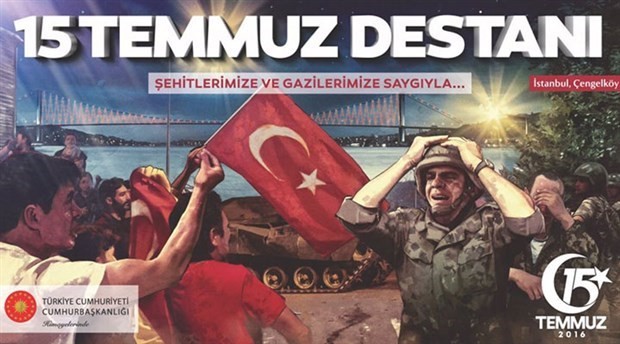 A poster used by the Presidency’s Office in Turkey has caused reactions as it was revealed that the image of a soldier used on the poster for the July 15 commemorations is actually a photo of an American soldier, Ken Kozakiewicz.

Taken by David Turnley back in 1991 during the Gulf War, the original image shows Sergeant Kozakiewicz as he cries in grief of losing his friend Andy Alaniz at a ‘friendly-fire’ towards the end of the war.

The award-winning image of Kozakiewicz, which comes up on top of the search results on Google for the words ‘crying soldier’, is on the official announcement posters of the presidency for the commemoration ceremonies of the failed coup of last year.

A social media user from Turkey with the account name of Arda İlkin Parlak also pointed out that his picture was also used in the background of the image on the poster. ‘Why am I in this poster? There is nobody to give an explanation!’, Parlak wrote in a tweet questioning the usage of one of his pictures in the poster of the presidency’s office.

The changes made in the official Turkish flag image in the poster have also been reacted to by many social media users, as well as, the opposition MPs.