In Turkey, Jihadist militants' books get published; journalists get jailed 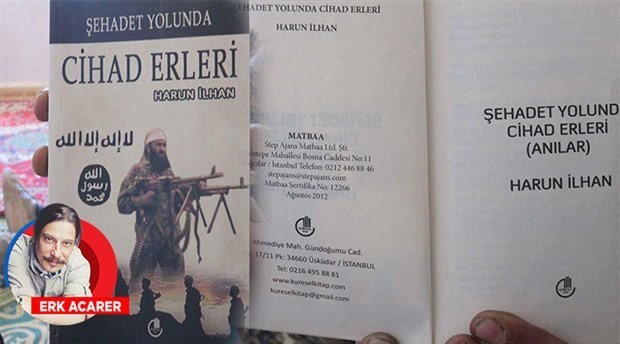 Previously, it was revealed that a book titled as ‘Soldiers of Jihad on the Path to Shahada’ was published in Stap Ajans printing house in İstanbul’s Bağcılar district by Küresel Kitap (Global Book) publishing house which has offices in Üsküdar and Fatih. The book was seized during the operations carried out against ISIL in the city of Tabqa.

There are numerous other books about ‘jihad in Syria, Iraq, and Afghanistan’ published and sold by the same publishing house. Among the books through which ISIL and Al-Qaeda are praised are ‘Jihad and Fight Against Suspicions’; ‘Guerrilla War’; ‘Science and Papers on Jihad’; ‘Defending Jihad’, ‘Invitation to Tawhid’; ‘To Those Who Fell into Prisons on the Path of Allah’; ‘Morality of Mujahid’; and ‘Zarqawi’.

Objective of the Küresel Kitap is defined by its executives as ‘to translate to Turkish the publications of movements that are active in the Islamic world and books about these movements.’

The executives of the publishing house Küresel Kitap, however, gave an interesting explanation when asked about the book that was found to be read by ISIL members. The executive asserted that the publication of the book that was found in Tabqa, along with their other books, is legal since they have the permit from the State and said: “How could we monitor which books ISIL militants read?”

Executive of the publishing house: 'It is not an ISIL book; it's an Al-Qaeda book'

The book ‘Soldiers of Jihad on the Path to Shahada’ is written by Harun İlhan, an arrested suspect who has been tried over accusations of membership to ISIL’s supreme team in Turkey. The executive of the publishing house, however, gave the following interesting statement: “Yesterday, two police officers gave us the letter from Mersin’s 1st Penal Court of Peace. There are criminal complaints about 18 books. 4 of these have not even been published. And, the police officers also saw this themselves and left after being convinced. This is not a publication of ISIL. It is a book by Al-Qaeda. These two organizations are fighting in Syria. And, it is normal for ISIL to obtain information. If they read these books, what can we do? This is not an awkward topic to be exaggerated. Today, many books with content of freedom and books that include insults to Atatürk are sold openly.”

Currently, journalists are jailed in Turkey and people are detained just for expressing their views, while publishing houses that print and distribute books of ISIL and Al-Qaeda remain in operation without any sanctions or punishment. So, it is left to the discretion of the public in our country!