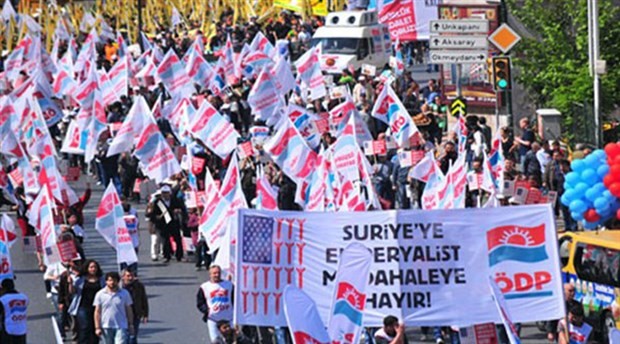 Freedom and Solidarity Party (ÖDP) of Turkey, released a statement regarding the attack of the western powers towards Syria and condemned the imperialist attack.

Here is the full statement:

We Strongly Condemn The Imperialist Attack On Syria

USA bombarded Syria joint operation with France and UK. Imperialists, radical Islamists, the forces who split Syria with a reactionary civil war over the course of many years, now fatal attack on Syria .

The imperialist coalition has carried out this attack, when the possibility of an end to the civil war in Syria emerged and the regime already defeated the Jihadists. Alleged 'chemical weapons usage seems to be Syrian government seems to be fabricated. The reason for the attack is the imperialist interests of USA and its allies. .

On the other hand developments revealed by the true character of our Islamist regime. AKP administration supports bombing of many cities of Syria. For a long time, the AKP had been making statements that gives the impression of challenging America at every opportunity, claiming to be genuine nationalist ! Today it turned out that all of this was done to make a room for themselves on the USA war coalition

The AKP has made our country part of the Middle East crisis. This war politics dragged our country into the throes of ethnic and sectarian cleavages, and the people who became more impoverished paid the price of increasing military burdens.

We are reminding to the AKP government that the destruction created by US bombs in Syria is not something to be defended! Give up collaboration with US! Do not be a part of imperialist policies in Syria.