P24: Journalists in state of emergency in Turkey 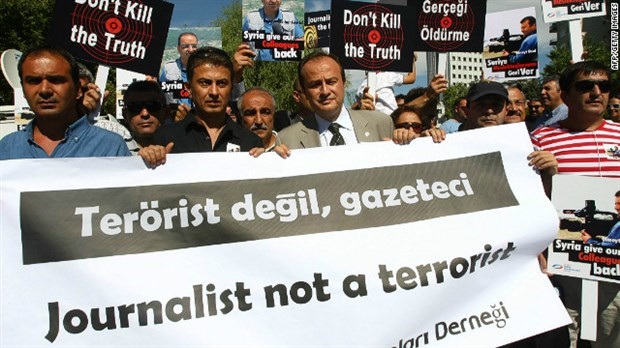 Nine executives and writers of the Cumhuriyet daily, including Editor-in-Chief Murat Sabuncu, one of the founders of P24 Platform for Independent Journalism, were put under arrest on Nov. 5 on terrorism charges.

The nine Cumhuriyet journalists were detained on Oct. 31 on charges of “committing crimes on behalf of the terrorist organizations Kurdistan Workers’ Party (PKK) and the Fethuhallist Terrorist Organization/Parallel State Structure (FETÖ/PYD),” the name given by the Turkish president and judiciary to supporters of Fethullah Gülen, a US based Islamic preacher, who Turkish authorities allege was behind the coup attempt of July 15.

Two accountants of the newspaper, Günseli Özaltay and Bülent Yener, who were also detained on Oct. 31, were released. Two other detainees -- columnists Aydın Engin and Hikmet Çetinkaya -- were let go on probation, with authorities citing old age and the two writers’ health condition as the reason for their release.

The newspaper’s former Editor-in-Chief Can Dündar and Cumhuriyet Foundation Executive Board President Akın Atalay, who are currently abroad, are also wanted in the investigation.

The Cumhuriyet operation has created a strong backlash both at home and abroad. Thousands gathered outside the newspaper’s office in İstanbul’s Şişli district. Fourteen leading global rights and freedom of expression groups released a statement addressed to the Turkish president calling for the immediate release of the detained journalists. Consuls representing EU countries visited the newspaper’s office to show solidarity. On Nov. 5, the Republican People’s Party (CHP) convened an emergency meeting of its Central Steering Committee (MYK) after the arrests.

Other detentions, internet blockage and arrests

Outside the Cumhuriyet probe, the İzmir correspondent of the JINHA news agency Ayşe Yılmaz was detained by police in İzmir on Nov. 4.

The Cumhuriyet arrests come one day after nine deputies from the Peoples’ Democratic Party (HDP), including the party’s co-chairs Selahattin Demirtaş and Figen Yüksdağ, were arrested and sent to prison.

The ambassadors of EU countries to Ankara held an emergency meeting in the aftermath the arrests of the HDP deputies and Cumhuriyet journalists on Nov. 5.

The BTK order comes one day after Turkey experienced a nationwide Internet blockage. On Nov. 4, access to all social media services, including the messaging service Whatssapp, were blocked inTurkey. In the final week of October, many Eastern and Southeastern provinces, primarily Diyarbakır, had experienced Internet blockages. Access bans in Turkey are common and it is well-known that authorities use Internet throttling extensively to keep users offline, hoping that such throttling would lead to less reaction than outright blockages.

YÖN Radio, a left-leaning radio station, and children’s television station Zarok TV, which were shut down under a prime ministry decree in late October, were allowed to resume broadcasts on Nov. 5. However, Zarok TV, a Kurdish-language children’s network, will have to ensure that 40 percent of its broadcasts are in Turkish.
With the return of Zarok and Yön, the number of media outlets shut down under Turkey’s State of Emergency has dropped to 166 from 168.

Journalists arrested under State of Emergency as part of coup investigation

Journalists taken into custody as part of coup probe


Journalists being sought in coup probe by judiciary

List of media outlets shut down under State of Emergency decrees

Outlets allowed to resume broadcasts after being shut down under SoE: Zarok TV (must comply with new requirement of 40 percent of broadcasts in Turkish), Yön Radyo.