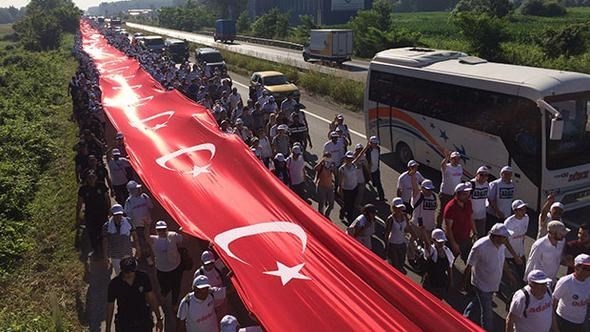 Justice March of the opposition groups in Turkey, which was launched by main opposition party CHP’s chair Kemal Kılıçdaroğlu on June 15 in Ankara, was on its 17th day on Saturday (July 1). Kılıçdaroğlu and thousands of participants who have been marching along with him have already completed the 300 kilometers of the 420 kilometers long distance between Ankara and İstanbul.

Worry of Turkey’s AKP over the opposition’s Justice March

As BirGün reporter Uğur Şahin reported from the site, the crowd took off this morning from Sakarya province.

Provokers and small groups of aggressors again appeared during the march. As it happened before, a group of people making the Rabia sign chanted slogans against the march and the opposition and insulted the participants.

A young man, Sami Can Otakın, was wounded as a result of a group of provokers throwing stones at the crowd from their cars as they passed by on the road.

Talking to Uğur Şahin from BirGün, Otakın also said those who threw the stones could not be clearly seen and caught.

Some participants also mentioned that at times people passing by in cars yell at the crowd by saying ‘the terrorists are walking.’

On the other hand, many others give support to the marchers by honking or chanting slogans with them.

Prominent female authors of the country, such as Aslı Erdoğan, Aslı Perker, Ceren Sözeri, Karen Alguadiş and several others, also participated in the march today, along with renown theologian and a member of anti-capitalist Muslims platform, İhsan Eliaçık.

As Gonca Tokyol from T24 reported, author Aslı Erdoğan said: ‘The stage curtains were opened with us and now we are hundreds of thousands of – actually millions of – people with all kinds of social backgrounds who feel victimized, one way or the other, by the injustices...’

Around 300 lawyers from 17 different bar associations from across the country were also present today. Sports fan groups also joined the march and held a Turkish flag more than 1000 meter long.

While taking the first break of the march in Akyazı district of Sakarya, Kılıçdaroğlu gave statements and said: “We are starting our 17th day. It is again a nice day. The sun is nice and our Justice March continues. There is a balance and justice within the universe created by God. And, unfortunately, humans are the ones who break that balance and justice. We hope for the concept of justice to be felt and embraced by people of all ages, from 7 to 70. Let’s rise our sense of justice and let’s act justly.

Without any discrimination over identity, belief, and lifestyle, let’s live all together in peace. And, the basis for that to happen is justice!”

Kılıçdaroğlu also expressed concern over the wild fire that recently started in southern provine of Alanya and said ‘he hopes for it to be taken under control as soon as possible.’