Anasayfa BİRGÜN DAİLY Houses of no voters in Turkey raided by police; 38 people in custody

Houses of no voters in Turkey raided by police; 38 people in custody 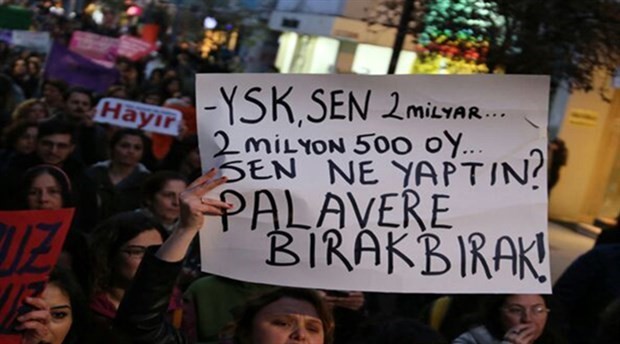 As objections and protests against the scandalous and unlawful decision of Turkey’s Supreme Board of Elections (YSK) grow, houses of 38 people in İstanbul were raided forllowing their participation in a demonstration in Beşiktaş district of İstanbul earlier this week.

The 38 ‘no’ voters, among whom is also provincial head of Turkey’s Freedom and Solidarity Party (ÖDP), Mesut Geçgel, have been taken into custody with the accusations of ‘provoking the public.’

Member of ÖDP’s executive board, Alper Taş, gave information about the detentions from his personal social media accounts and called on to the government: “Stop the detentions! Annul the referendum and save yourselves and our country from the situation you have put it in.”

Taş had also called on the government to annul the results earlier when a number of irregularities were detected.

Citizens of Turkey casted their votes on a controversial constitutional amendments package on Sunday (April 16). While the results (51% yes; 49% no) were announced by state-run AA ahead of official announcement of the Supreme Board of Elections at the cost of casting doubt on the handling of the process, a last minute decision of the elections board to count the unstamped ballots - claimed to be over 2 million – as valid sparked major reactions both among party members and the public.

Protests in big cities, such as Ankara, İstanbul, İzmir, Antalya, Eskişehir, have been going on since Sunday evening. Around 20 people were also taken into custody in Antalya during the protests.