PKK carried out a bomb attack In Şemdinli district of Hakkari with a car yesterday, on October 9th. Governor’s Office of Hakkari announced that 18 people – 10 soldiers ad 8 civilians – lost their lives in the attack, while 27 have been wounded. 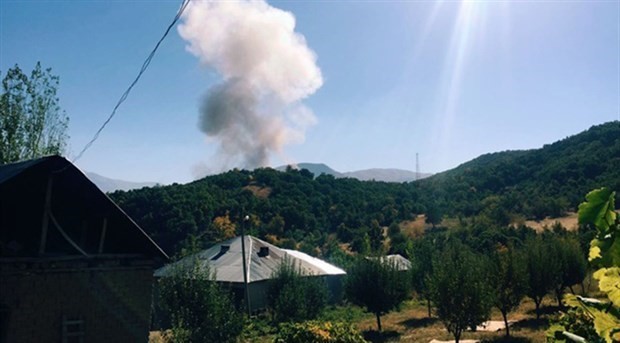 On Sunday, October 9th, PKK carried out a bomb attack at Durak Police Station in Hakkari’s Şemdinli district. As a result of the attack, 10 soldiers and 8 civilians lost their lives and 27 people (16 of them civilians) got wounded.

The car-bomb attack was carried out on Şemdinli-Yüksekova highway by PKK as there was a road inspection at the site. While the impact of the bomb caused a big hole (5 meters deep and 10 meters wide) on the ground, clashes took place in the surrounding areas following the deadly attack.

The Governor’s Office of Hakkari has shared the details of the attack, stating that ‘a mini-truck was detected to be approaching the area where there was a road inspection and it was commanded to stop’. As the mini-truck did not stop, security forces on the site opened up fire. Meanwhile, PKK militants around the area also fired back and the car-bomb, with the load of 5-tons explosives, was detonated.

Prime Minister Binali Yıldırım gave statements about the attack, saying: “It was a pick-up truck loaded with 5 tons of explosives that had dove into the check-point in a suicide act.”

President Erdoğan: ‘Some acts that cannot be prevented…’

In an official written statement, President Erdoğan made the following comments: “Some acts that cannot be prevented also take place at times… The attempt of terrorists in Ankara (Haymana) which ended up with terrorists detonating themselves; the attack in İstanbul (Yenibosna) which resulted in 10 of our citizens to get wounded; and, this act in Şemdinli are all an obvious demonstration of it!”

Also sharing his comments about the recent terror attacks, Deputy Prime Minister Numan Kurtulmuş posted from his personal twitter account the following statements: “Turkey is never going to surrender to terrorist organizations. These foul attacks will be brought to attack.”

CHP Chair Kılıçdaroğlu: ‘They should not forget that they are in a position for creating solutions’

CHP Chair Kemal Kılıçdaroğlu has also given statements about the recent attacks and sent a message to AKP by asserting ‘the authorities cannot be the ones complaining but they must actually be the ones creating solutions for the problems. Kılıçdaroğlu added: “It should be known that the perpetrators of these cruel acts are never going to reach their goals... In order for the pains to be softened and for our people to reach peace, those in decision-making positions must act with responsibility and foresight. However, I must add with regret that this responsibility and foresight have not really been understood by the current authorities. Those in power cannot be the ones complaining; they must never forget that they are the ones in the position to create solutions.”

HDP: ‘Lasting peace must be sustained!’

In the written statement of HDP, it has been highlighted that ‘the ever-deepening clashes and war atmosphere were causing new wounds and pains’. The statement included the following remarks: “The ruling party, which has been responding to each call and attempt for peace by intensifying its war policies and triggering further tensions and polarization, is the party directly responsible for this devastating picture… Our party is against violence regardless of by whom it is carried out; and, it is never going to compensate on this principle… We emphasize once again that we are ready to take on whatever responsibility we need to handle with regards to peace and solution. Everyone must do what they are required to for the sake of lasting peace; and, steps for solving our problems through dialogue and negotiations must be taken!”

Meanwhile, RTÜK (Supreme Council of Radio and Television) has announced that it has issued a broadcast ban – based on order of the Prime Ministry - on reports about the attack, including videos and other visuals from the incident site and of the deceases and the wounded.

TSK (Turkish Armed Forces) has also released a statement announcing that it has started ‘a strong air-bound operation’ in the area.