Women's associations in Turkey call for support to Justice March

In a joint statement released recently, more than 70 women’s associations in Turkey announced that they will be joining the Justice March today (July 6). They also called on people to join. The members and representatives of the participating women’s associations will be joining the march from the town where Italian artist and peace activist Pippa Bacca – also known as the ‘Bride of Peace’ – was raped and killed in 2008 while she was travelling across the region through hitch-hiking to spread a message of world peace. 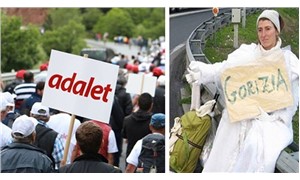 Women said in their statement: ‘As women, we give importance to join this Justice March with our own demands for justice because since the time of the murder of Pippa – just as it had been the case before it -, thousands of women have been buried under the ground while the crimes of men against them have been at times gone unpunished and, at other times, been abated in the name of ‘general moral norms.’ LGBT individuals have been subjected to hate crimes – even been killed – and thousands of children have been abused. The state of hating and lynching those who are ‘different’ have become to be defined as a ‘sensible’ act; and, it has even been applauded at certain times…We, the women, want to march for real justice; not a patriarchal justice. The injustices especially felt lately under the state of emergency laws have increased violence of men even more. On top of dismissals of hundreds of people, detention of women MPs, politicians, and local governors; shutting down of women’s shelters, women’s associations, and women’s news sources have put women and children into a even more fragile situation in the face of men’s violence. Women are being pushed away from politics. We are going to fight until women get equal rights and opportunities as men in all field of life! If there is no equality, there will be no justice!’

Front-page article of BirGün published on 6 July 2017, Thursday with the headline of 'Women march against injustices'